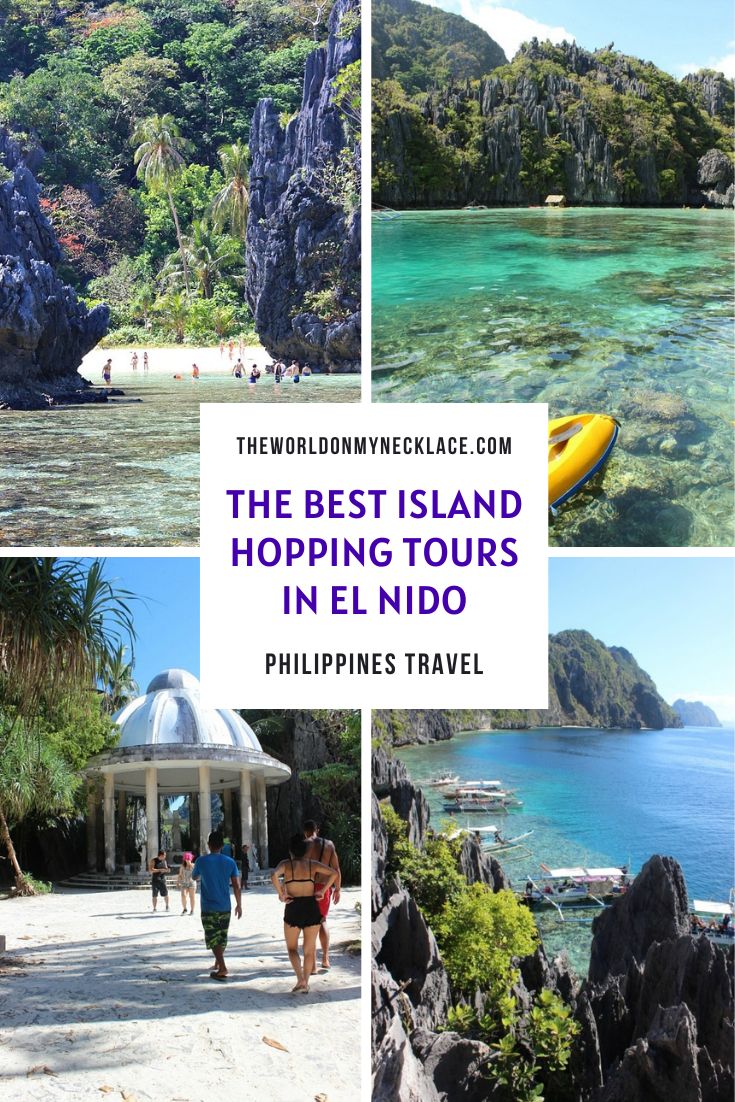 If you are heading to El Nido soon, here are my picks of the best El Nido tours if you want to explore the surrounding islands – it’s the best thing to do in El Nido!

El Nido is a cool little town with beautiful beaches nearby, lots of great restaurants, and a vibrant backpacker culture. But spending time in El Nido itself isn’t why most backpackers come here.

People really flock here to do the El Nido Island hopping tours to the surrounding islands of the Bacuit Archipelago. Although El Nido is beautiful, it’s these small islands that are the real stars of Palawan.

Similar in look to the famous Halong Bay of Vietnam, the Bacuit Archipelago is an absolute aesthetic dreamland with 45 islands of soaring limestone cliffs, secluded beaches, and idyllic lagoons with wild, untamed jungle populating the island interiors. And the water: WOW! 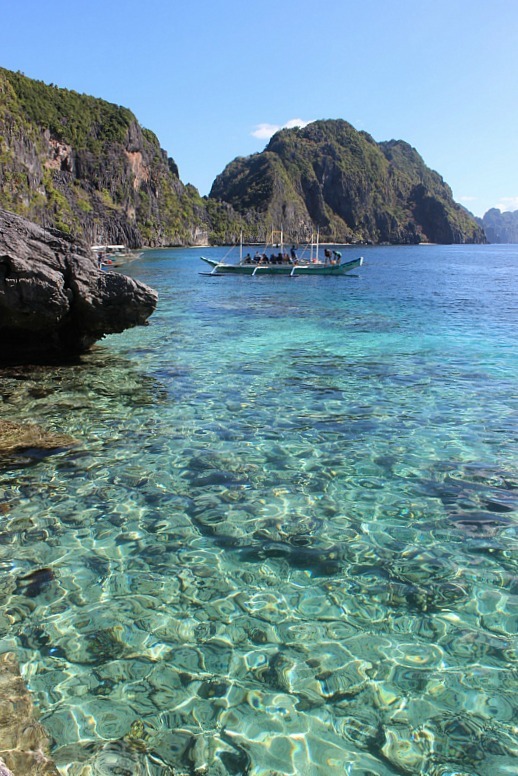 Swirling waters of emerald greens and light turquoise blues, shimmering and so clear you can see straight to the bottom. Tropical fish abound. It really is as amazing as it sounds.

You can hire private boats to tour these paradise islands but most travelers choose the cheap and easy option of visiting them on an organized day trip. Luckily there are some excellent and affordable El Nido tours on offer.

There are four El Nido Island Hopping day trips to choose from: Tour A, Tour B, Tour C, and Tour D. Tour A and Tour C are the most popular and we had heard great things about both from other travelers that we met.

We decided to find out for ourselves if these tours lived up to their reputations, choosing to do both during our time in El Nido. And I have absolutely no regrets – they were both fantastic!

Here’s a little run-down of what each of the El Nido tours entails:

Tour C was all about the beautiful beaches. El Nido Tour C is the first tour we did and the one that I had heard the best things about. It is the most popular El Nido tour.

There were only six of us on a small boat with our guide and I definitely preferred that to some of the larger boats with tons of people that we saw.

First stop was Helicopter Island, or ’Yoshi’ Island if you are on a boat with gamers, nicknamed for its similar shape to Yoshi the dinosaur from Super Mario. Helicopter Island is home to a gorgeous sandy beach, as well as some pretty good snorkeling offshore. 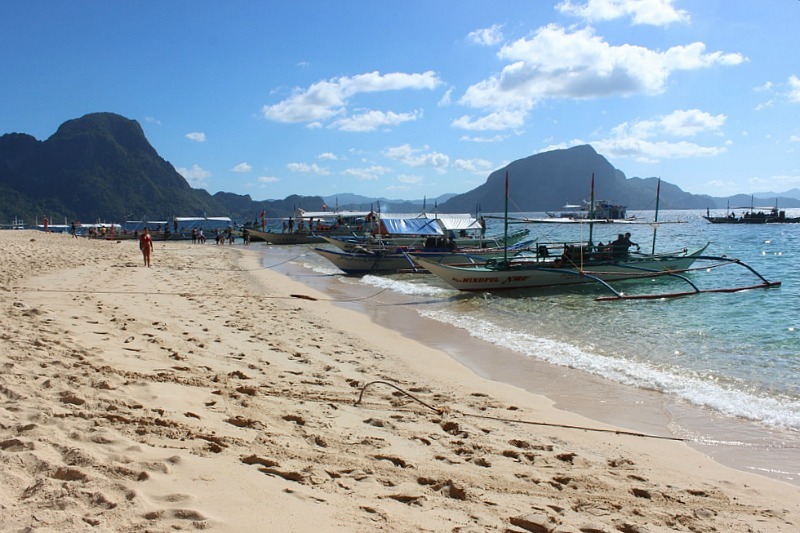 The second stop of El Nido Tour C was Hidden Beach. Ironically it was the most crowded beach we went to all day – so not so well hidden. It was low tide and swimming over the reef to reach the shore was pretty scary as we were only centimeters away from scraping it. The beach wasn’t so exciting either.

I wasn’t a fan of this one, although we did see clownfish playing on the shallow reef by literally standing above them and looking at them through the surface. THAT was pretty cool. So was seeing a turtle as we were leaving, swimming a few meters from the boat! 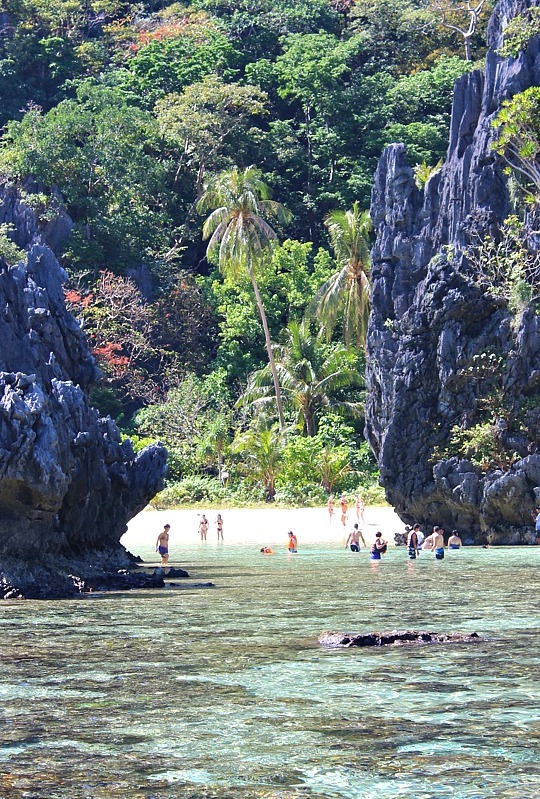 Star Beach was our third stop on El Nido Tour C and where we had lunch which meant we had a bit longer there than our other stops of the day. Lucky me because Star Beach was my favorite.

It is a small and secluded beach in a stunning location surrounded by jungled limestone karsts and incredible green/blue water. I could see other small strips of white sand beach dotted along the coastline in the distance – so bright they looked like they were glowing. 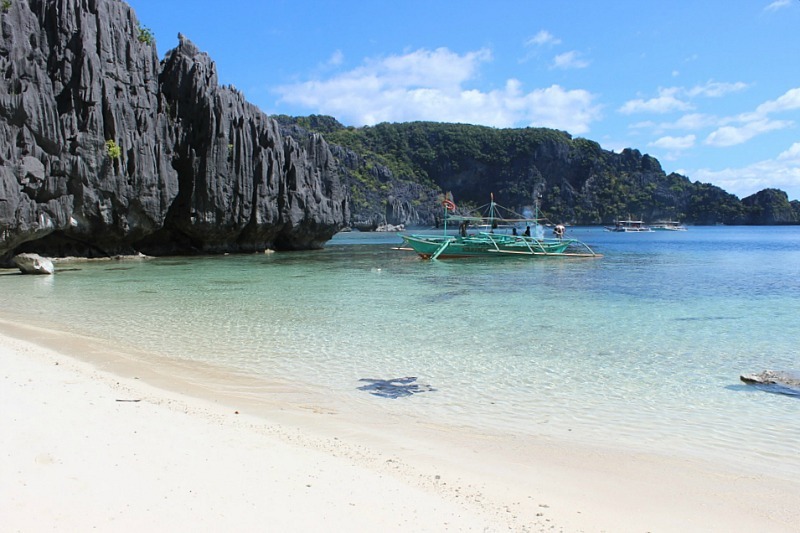 After a lunch of BBQ pork and chicken adobo (one of my favorite Filipino dishes), grilled whole fish, salad, rice, and fresh fruit on the beach, I swam around to the next beach, trying to avoid the tiny jellyfish that were clustered in the water close to shore.

After swimming a short way out I was clear of them, and in some of the purest water I have ever seen – a dizzying array of blues and greens.

The next beach was deserted. I pulled myself onto shore and walked to a fence behind the beach where I could see the ruins of a house and the jungle interior of the island. It felt like I was the only person in the world. I was reluctant to swim back, maybe I could just live there forever?

But it was time to leave, and I didn’t want to miss out on seeing Secret Beach.

We were dropped around from the cave entrance to Secret Beach, which could only be accessed by swimming through the cave opening. It was no secret but I could imagine it once was. It was very beautiful.

Our group floated in the shallows, talking shit and enjoying the beauty of the place. There were a lot of other people there from different tours and it was crowded, but it was still a great spot. 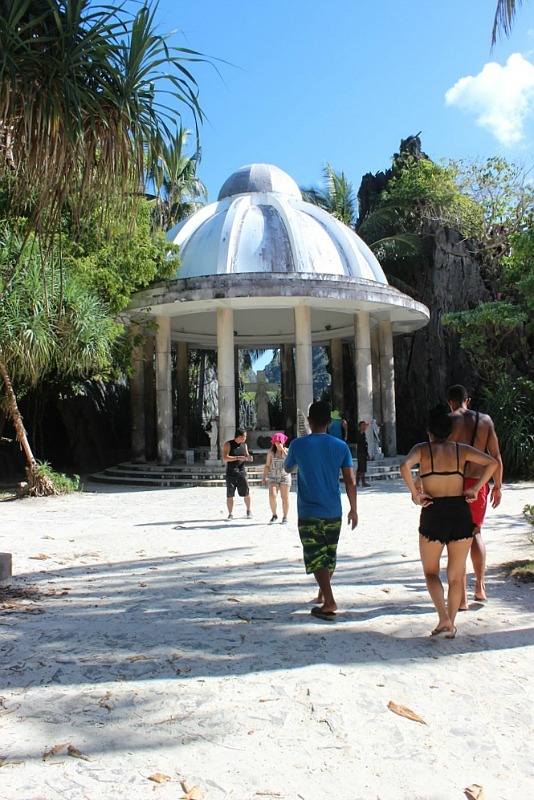 The last stop of El Nido Tour C was to the Matinloc Shrine, a circular-shaped shrine dedicated to the Virgin Mary with ruins of a mansion next to it. I found the mansion ruins the most interesting part of this stop.

I overhead a guide telling his clients that a rich German guy and his Filipino wife used to live there but I’m not sure why it was abandoned by them and left to decompose so much.

We also climbed a short way up a jagged rock cliff to a viewpoint over the rocky coastline and azure waters – those waters looked even better from above. 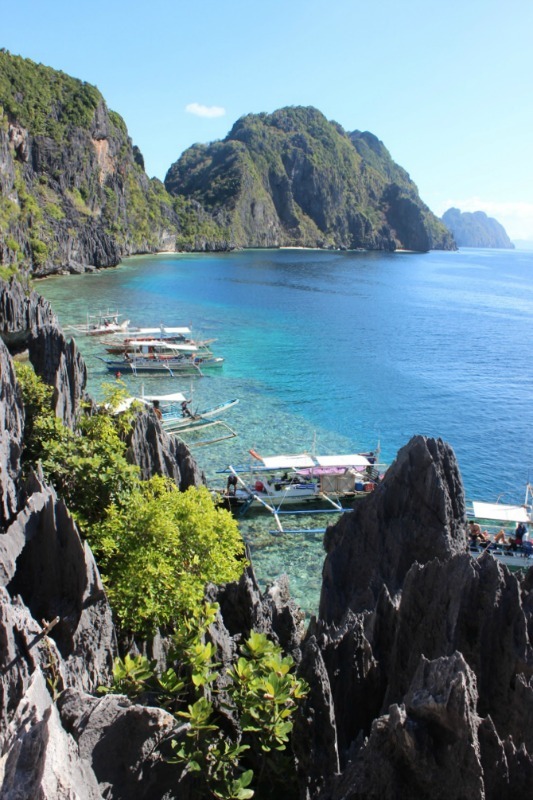 On the way back we saw a pod of whales – so cool! We followed them at a distance for a bit before they disappeared on a deep dive and we headed back to El Nido.

I loved Tour C and having such a great group made the tour even better. Now it was time to find out if Tour A would be even better.

El Nido Tour A is all about the lagoons, and after seeing pictures, I was super excited to get going on this one.

Filipino John was our guide for El Nido Tour A. We had met him a few days earlier through a crazy American guy, also named John (known as American John), that had taken him under his wing. We had all done Karaoke together and Filipino John is one hell of a singer. 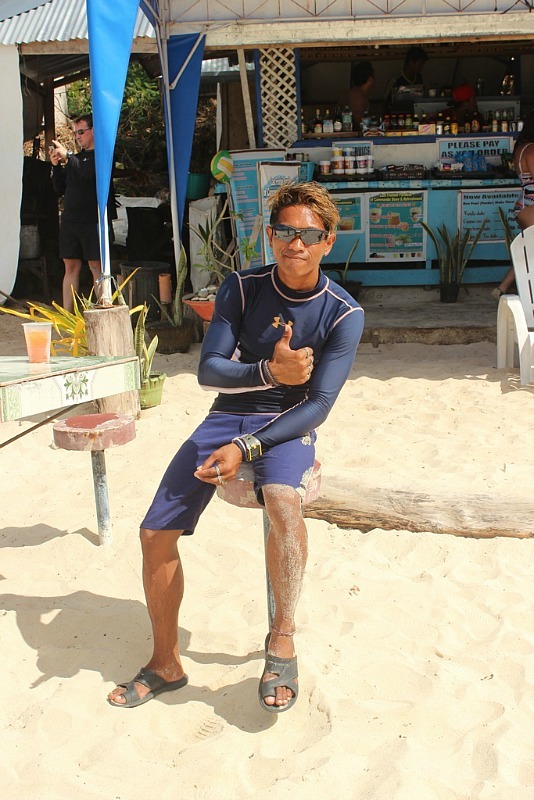 American John and his wife were also on our tour as well as a lady named Love and a brother and sister named Bing and Bong – gotta love those Filipino names.

The first stop on El Nido Tour A was the beautiful Seven Commandos beach. It is a large beach with a couple of beach restaurants, crystalline water, and fine white sand.

Quite a few other boats were already there when we arrived but by the time we left, we practically had this gorgeous beach to ourselves. And there were puppies! It was hard not sneaking one off the island with us. 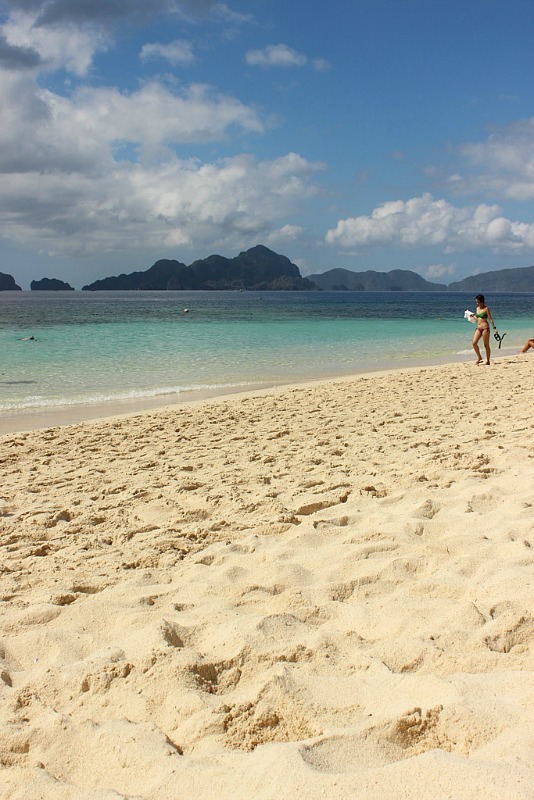 Then it was lagoon time!

Small Lagoon was the second stop on El Nido Tour A, and the place I was most looking forward to. And it certainly didn’t disappoint. For me, it was the most incredible place I went to in the Philippines – I really, really loved it.

The color of the water at the entrance to the lagoon was incredibly vibrant and diverse, but also – completely full of jellyfish, including some pretty big ones.

Apparently they didn’t sting, much, but they just freaked me out anyway so we hired a kayak to get to the entrance. 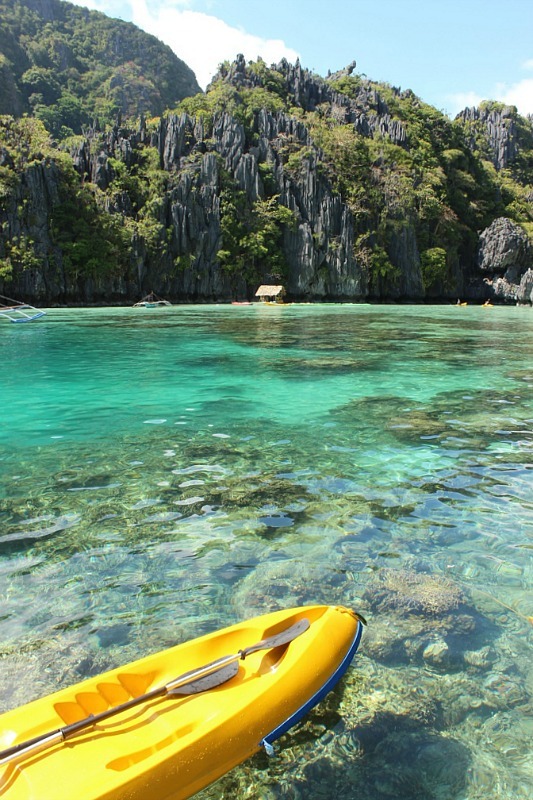 Kayaking through a narrow opening in the rocky cliff, we were suddenly in this incredible lagoon. And the jellyfish hadn’t followed us.

Small Lagoon is surrounded by cliffs and completely enclosed. Jungle fringed the top of the cliffs, and the deep green water was slightly cloudy and brackish.

I took advantage of the lack of jellyfish and got out of the kayak to swim. It was so peaceful. Then a fish bit me and I made a hasty retreat, out of the water and back into the kayak. I wish so hard that I had been able to take pictures of Small Lagoon but I wasn’t willing to take the risk with my DSLR.

Back at the boat, an awesome lunch awaited us. Pretty much the same things as Tour C – BBQ chicken, grilled fish, BBQ pork belly, a colorful salad, rice, and fresh fruit. A small boat selling beer and soda pulled up and we got some cokes to complete our meal. 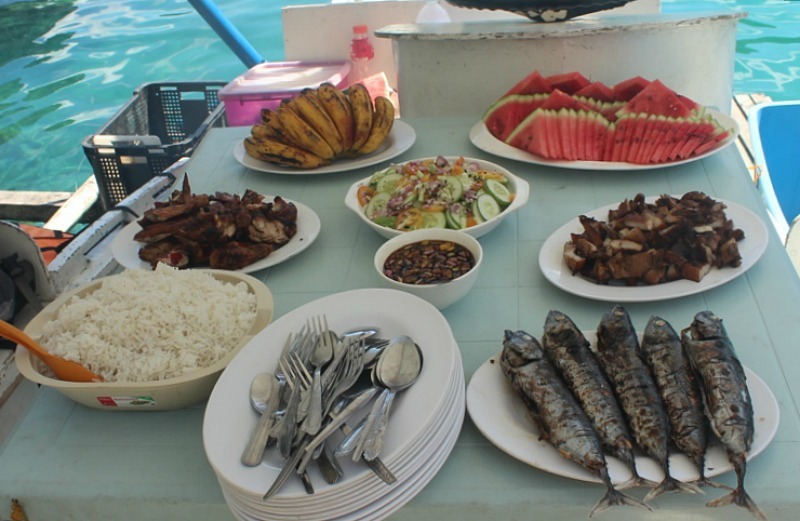 I wish we could have stayed there all day.

My least favorite stop of both tours – Secret Lagoon – was next. So many people were waiting to go through the very narrow entrance, which involved squeezing and contorting to fit, so we had to wait for ages till it was our group’s turn. It was cold in the water in the shade, lots of small jellyfish too.

Once inside I wondered why I had bothered waiting. The water was murky and in the shade. It was only a small lagoon and there wasn’t really anything to see. Then we had to queue to exit as well, shivering as we waited.

It was a bit of a bummer. 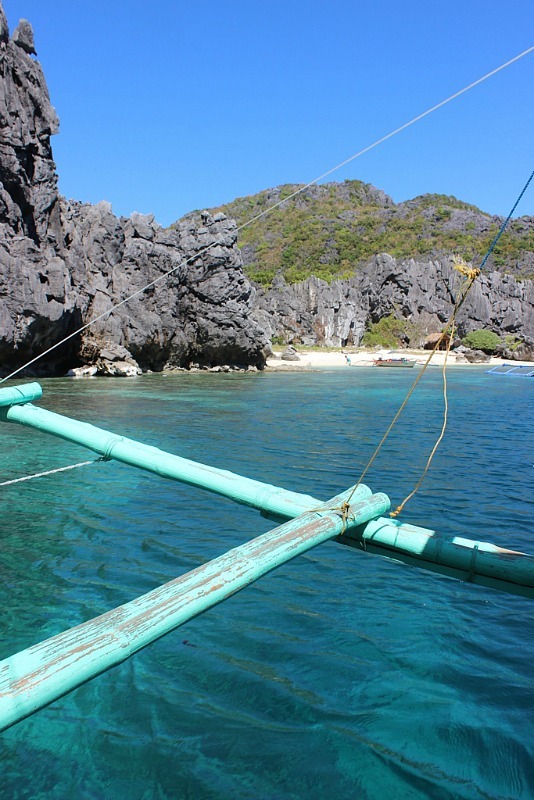 Big Lagoon was our last stop of El Nido Tour A. It was low tide so we had to walk/swim in the shallow water to reach the lagoon, which was more like a massive waterway.

Lots of small, clear jellyfish with purple spots floated close to the surface. They had no stingers and felt like rubber when I gently pushed them aside. Sea urchins prickled outwards from the lagoon walls.

The Big Lagoon didn’t conjure up the love I felt for Small Lagoon. The sun was behind the cliffs and my hands had begun to numb. It was time to call it a day.

I loved both El Nido Island hopping tours that I did, although not every stop was incredible, the ones that were more than made up for it. 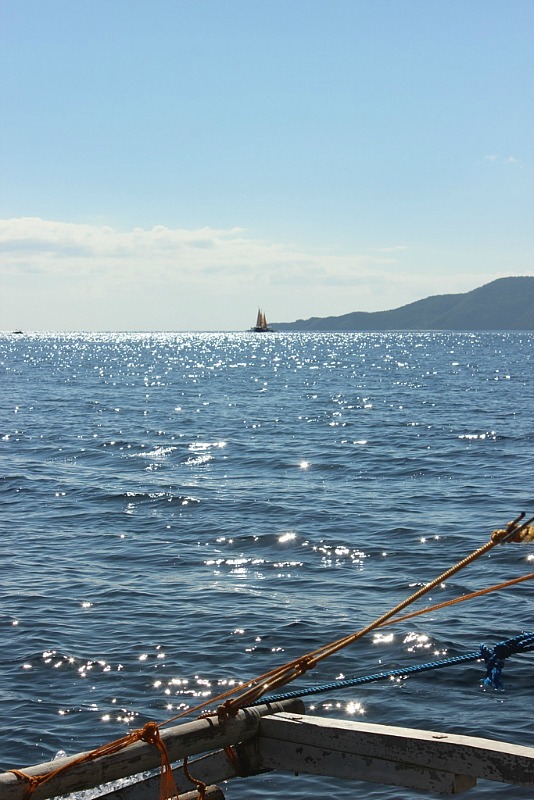 Where To Stay in El Nido

For the best deals, stay at one of the popular hostels in El Nido which include Mad Monkey Nacpan Beach, Spin Designer Hostel, Frendz Hostel El Nido, and Outpost Beach Hostel.

The Best Insurance For Your Philippines Trip

Make sure you get travel and health insurance before your London trip. Safety Wing is my go-to and they are cheap and easy to claim with. They even have COVID coverage. 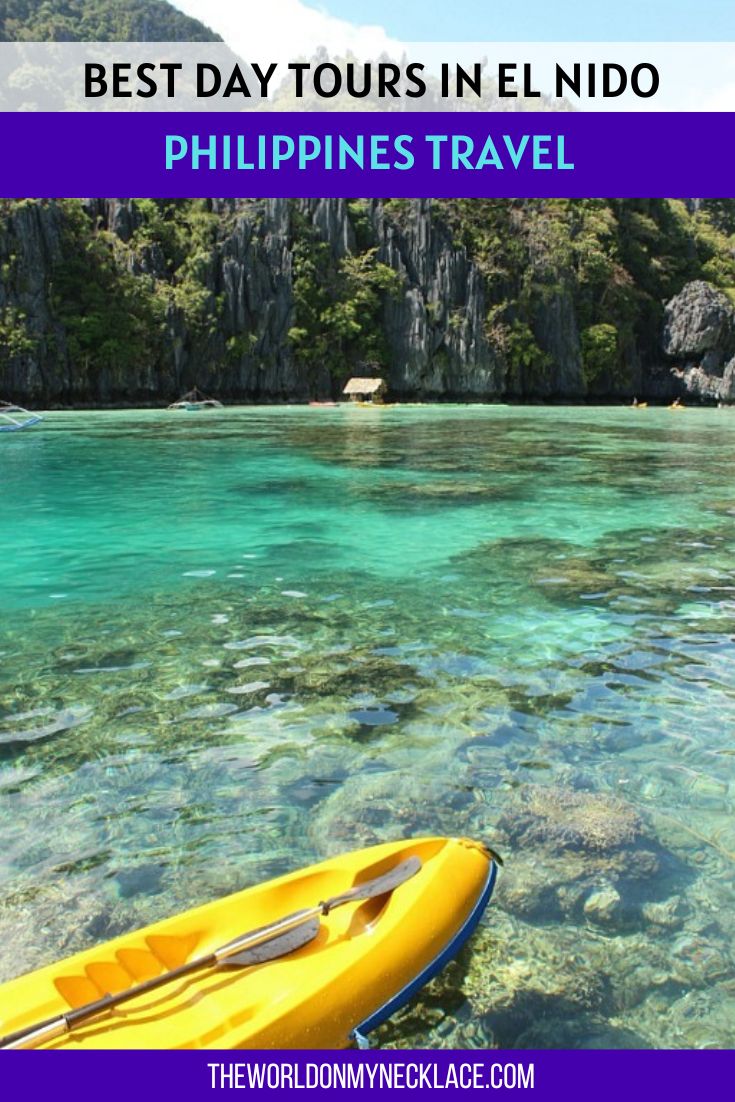 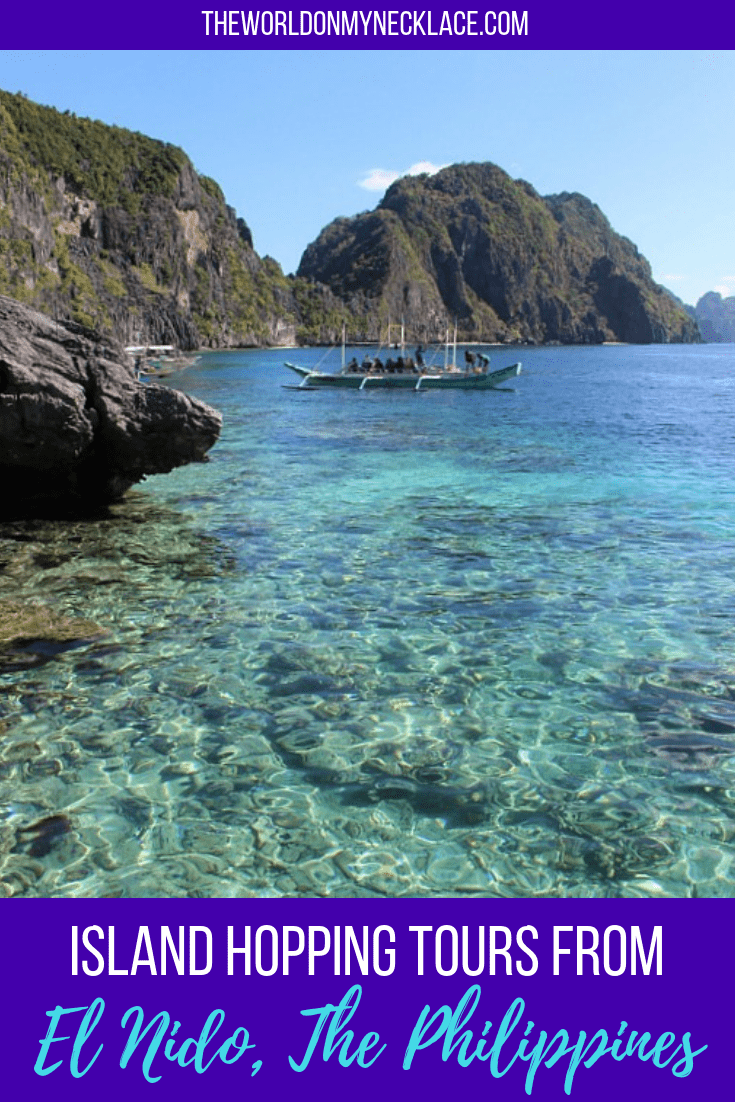