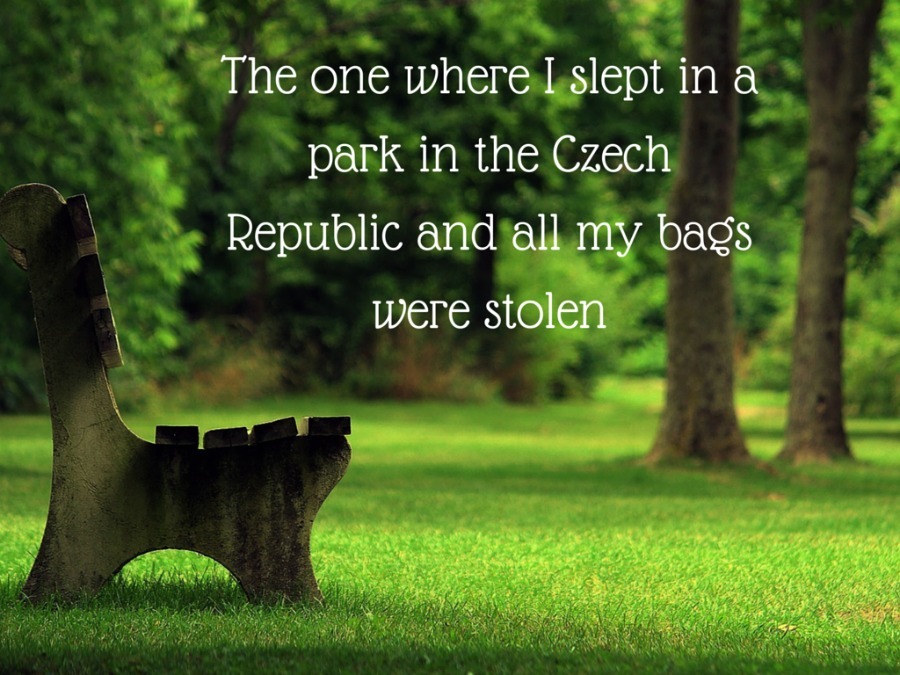 Travel wouldn’t be travel without things going horribly wrong once in a while. I have definitely had my share of bad luck over the last ten years of travelling and as I don’t want all of you out there to think that everything runs smoothly for me all the time (far from it!), I want to start sharing some of my more memorable travel fails with you.

In this travel fail I will take you back to 2007, when I spent two months backpacking through Europe with one of my best friends. After travelling around Europe in a van for three months the previous summer with a bunch of drunken Aussies and Kiwis, I was looking forward to a different Euro travel experience – this time taking buses and trains and staying in Hostels.

My friend and I were both really excited to be visiting Český Krumlov, a small medieval village surrounded by a river in the southern Czech Republic.

In the photos I had seen it looked like a perfect fairy-tale village. 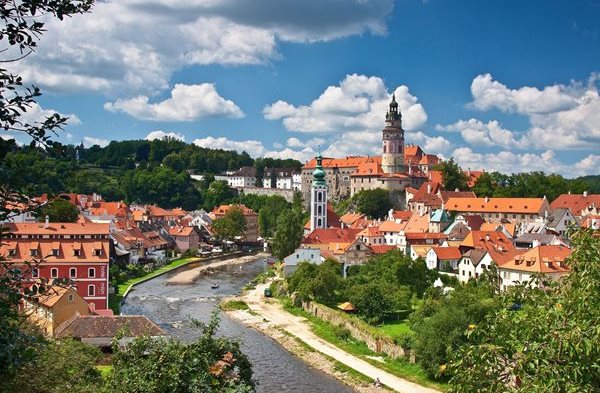 After three nights in Prague we were planning to spend a couple of nights in Český (I can call it that because we went through a lot together) to relax and unwind after mainly travelling through Cities for the previous weeks.

Alas, the relaxing two days we had envisioned weren’t to be.

It all started going wrong the day before we arrived, when we were still in Prague. One simple mistake started a chain of events that would see me barefoot, short-sighted and wearing my friend’s pale pink board shorts early in the morning, only two days hence.

Anyone that knows me will tell you what a control freak super organised person I am. As we were travelling, I would book us into a hostel for our next destination a day or two before we arrived to ensure it was all organised and that we had a place to stay.

My friend K, who is more of a fly-by-the-seat-of-your-pants kind of guy, thought that I was being too organised and that my planning didn’t leave much room for the spontaneity that he embraced.

It’s not that I don’t want to be more spontaneous. In fact, I think that I am in some ways. My decisions to do something bold like move countries or travel for extended periods of time come about spontaneously – but then I spend months thinking about them and planning them. OK, maybe I’m not that spontaneous.

I decided to try being spontaneous this time and to just show up in Český Krumlov where we could shop around for a hostel when we arrived and find the perfect one, thus our time there would be perfect.

Well, you have probably guessed by now that it didn’t go down that way. Not even a little bit.

We were meant to arrive in Český at around 8pm, if I remember correctly. Enough time to find a hostel in the tiny city where they were meant to be numerous – swing a cat and you would hit one.

Little did we know that there were track works being done on the train line between Prague and České Budějovice that would result in us missing our connection.

When we got to České Budějovice after about a half hour delay, our train to Český Krumlov had already left. Considering we bought our train tickets all the way through to Český, you would think that perhaps the connecting train would wait, but no.

The next train was about three hours away. Not good.

You have to remember that this was in the days before smart phones. We knew we were going to be arriving into town really late and that it could be a lot harder to find a room at that time, but there wasn’t much we could do about it.

We spent the three hours going for a brief wander around the town before enjoying the local tipple, Budvar, in a pub near the train station. They must not see many backpackers there because we got a lot of inquisitive stares directed our way. Crocodile Hunter was on TV, dubbed over. It was mesmerising seeing Steve Irwin speaking in Czech.

Finally it was time to catch our 45 minute train to Cesky, followed by a 30 minute walk into town.

Cesky was pumping. It was Saturday night and there were people everywhere, spilling out of pubs and drinking in the streets. I felt a sense of relief and was sure that we would find somewhere to stay.

It truly is a beautiful town and we were so happy to be there finally. 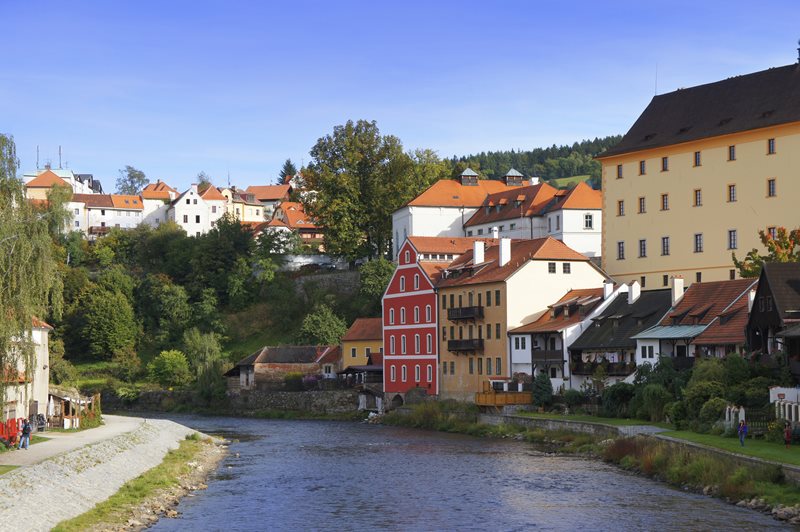 But everywhere was booked out or closed for the evening.

We literally went to every Guesthouse and Hostel in town and there was not one bed available.

My worst nightmare. This is why I am so organized.

One of the Hostel Receptionists we spoke to said that we should sleep in the park. Apparently a lot of people do it and we did have our own sleeping bags. I can’t say that I was keen but by this stage it was about 1.30am and we didn’t see any other options.

There were a few other backpackers already sleeping in the sprawling park which put my mind at ease, slightly.

We found a posse under a tree that was well enough away from the path. It was actually kind of exciting, like an adventure. We tucked up into our sleeping bags and after taking a couple of photos (look at us, we are sleeping in park!) went straight to sleep. 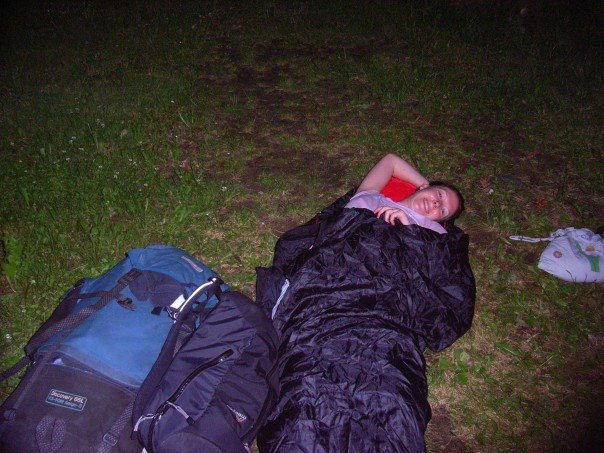 I didn’t sleep well. My sleeping bag was only a thin summer one, designed for warmer countries or for indoors. I tossed and turned. I tucked myself as far into my sleeping bag as possible and pulled the opening shut, around my head, trying to trap in some heat.

K woke up at 6am and thought I looked hilarious, like a black and red caterpillar, and took a photo of me before going back to sleep.

One of my bags was already gone.

K didn’t notice at the time because it was just my small day pack, and my big backpack was still beside me. We only realised days later when we looked at this photo. 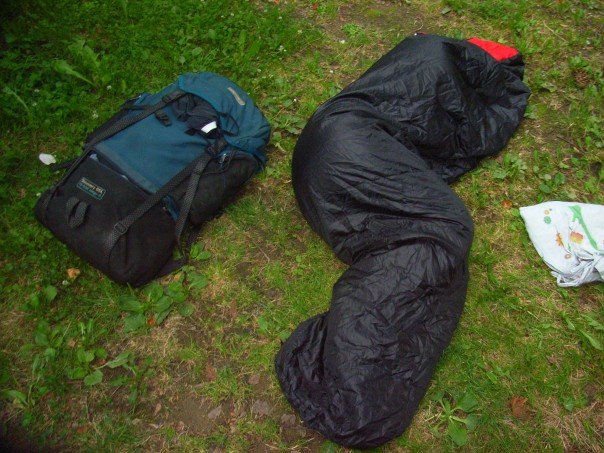 It gives me the creeps every time I look at it.

We both woke up a couple of hours later and my big bag was gone too.

All I had left was a bag of dirty laundry that I was using as a pillow as well as (Thank God!) my passport, wallet, phone and camera which were in my sleeping bag with me.

I didn’t even have any trousers, only the boxers I was sleeping in. K lent me his board shorts. He said I looked so lost, clutching my bag of laundry and wandering around aimlessly in his oversized shorts.

Oh that feeling you get when your stuff is stolen, I wouldn’t wish it on anyone. My stomach lurched and I felt completely and utterly helpless.

After feeling sorry for myself for a few minutes, we noticed something on the ground a few metres away that looked like the book I had been reading … And it was! We walked around the park and found a few more things that had been in my smaller backpack including my glasses which was a huge relief – I could see again!

Randomly, I looked along the treeline at the edge of the park and found my big backpack almost straight away! Everything was pulled out of it and was scattered around but it looked like most of my stuff was there.

I did a quick inventory and the only things that I could see that were missing was the £60 in cash I had stashed in a side pocket, a jar of jam and a cheap imitation silver necklace. The bottle of Budva beer that I had put in my bag wasn’t even stolen. Not sure what type of thief would steal a jar of jam but not a delicious beer.

I was so relieved to get most of my stuff back!

My small backpack was still missing and after searching the park thoroughly and finding a few more items that had been in the bag scattered throughout the park, we gave up looking for it and headed to the Police Station to report the theft.

We didn’t have long to wait before an Officer could see us. The unfortunate thing was that he didn’t speak English. Well, not much.

It was a long, slow process with lots of hand gestures and charades to convey what had happened but we got there in the end. Trying to ask for a Police Report so that I could claim the still missing items on my travel insurance was a different matter. He didn’t know what the word ‘insurance’ meant for a start and it was interesting trying to explain it to him.

After trying for a while and thinking that maybe he understood, he said to me with a confused look on his face ‘You want me to give you money?’ – guess I didn’t explain it so well after all.

After more confusion he finally typed up a police report for me. In Czech, of course.

There weren’t a lot of items missing in the end. On top of the items I mentioned that were stolen from my large bag, the following was stolen: my small Macpac backpack, makeup, my travel journal, a blank journal I hadn’t started writing in yet, my favourite small leather handbag and some other odds and ends that I don’t remember now.

The one thing that I was really upset about losing was my travel journal that I had been writing in for almost a year. That was priceless.

We decided to go back to the park for one more look around, not expecting to find anything else.

I saw some sugar packets on the ground that looked familiar. I recognised the design on them and realised that they were the ones that I had in my bag. There were a few more a couple of metres away then one more, close to the treeline. It was like a breadcrumb trail leading me into the trees, so I followed it.

And there, by the river, was my travel journal.

In the end I was pretty lucky. I got most of my stuff back and despite the initial stress (I will never forget that horrible feeling when I first woke up and realised everything was gone), it could have been so much worse.

When I have told this story since, people have asked me what I was doing sleeping in a park in the first place and why I didn’t attach my bag to me.

All I can say is that you never think these things will happen to you. And we didn’t feel like we had much choice. Also, if I had attached my bag to me would it have been violently ripped off me? Who knows.

For the rest of our trip, I went back to booking everything in advance and K didn’t say a word.

In the immortal words of Alanis Morrisette – You live, you learn. 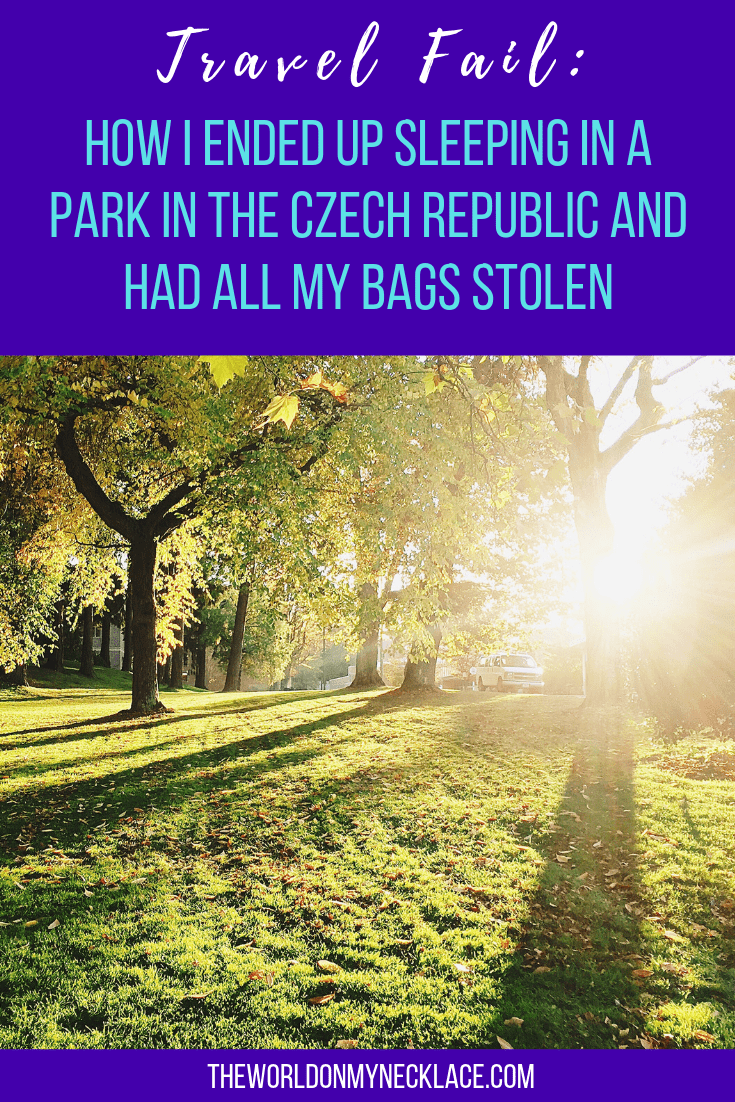