Islands of the World, Thailand 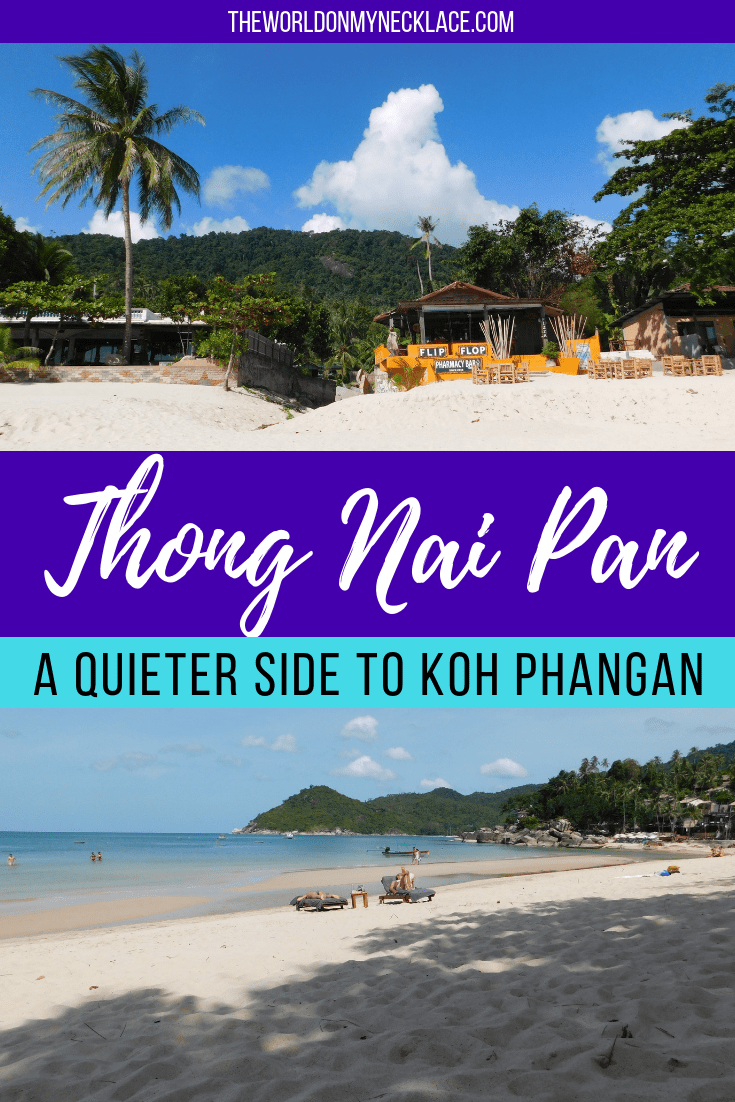 When I found myself in Thailand unexpectedly for dental work, I decided to add a beach stay onto my trip – and I am so pleased I chose Thong Nai Pan on Koh Phangan!

Koh Phangan was never an island that I particularly wanted to visit.

I was 33 on my first trip to Thailand and couldn’t have been less interested in attending a full moon/half moon/blood moon/blue moon/whatever moon party, and that’s why most people go to Koh Phangan, right?

Turns out that there are a lot of other reasons to visit Koh Phangan – it’s actually a very beautiful island, and away from the massive parties that are held there whenever the moon is doing something, it has a chilled out, hippy vibe. 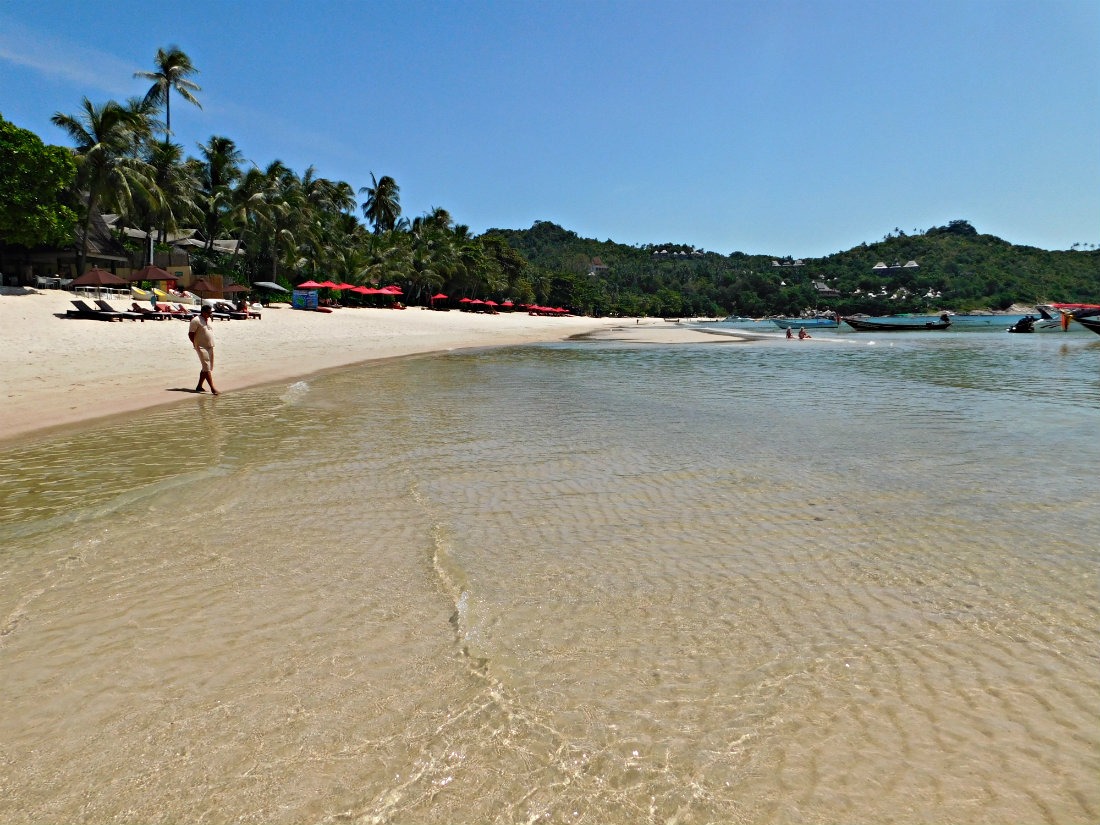 Unpredictable June weather is what brought me to Koh Phangan on my last trip to Thailand. I had originally wanted to go to the less-visited islands of Koh Kood and Koh Mak up by the Cambodian border, but rainfall in that region is meant to be the heaviest in June and I didn’t want to risk it.

I’m sure Koh Kood and Koh Mak are incredible, and I will get up there one day, but I am so glad that I was forced to go to Koh Phangan, because I completely fell in love with it.

A big, big part of the reason that I loved Koh Phangan was the area I was staying in – Thong Nai Pan. It is absolutely the best place to stay in Koh Phangan! 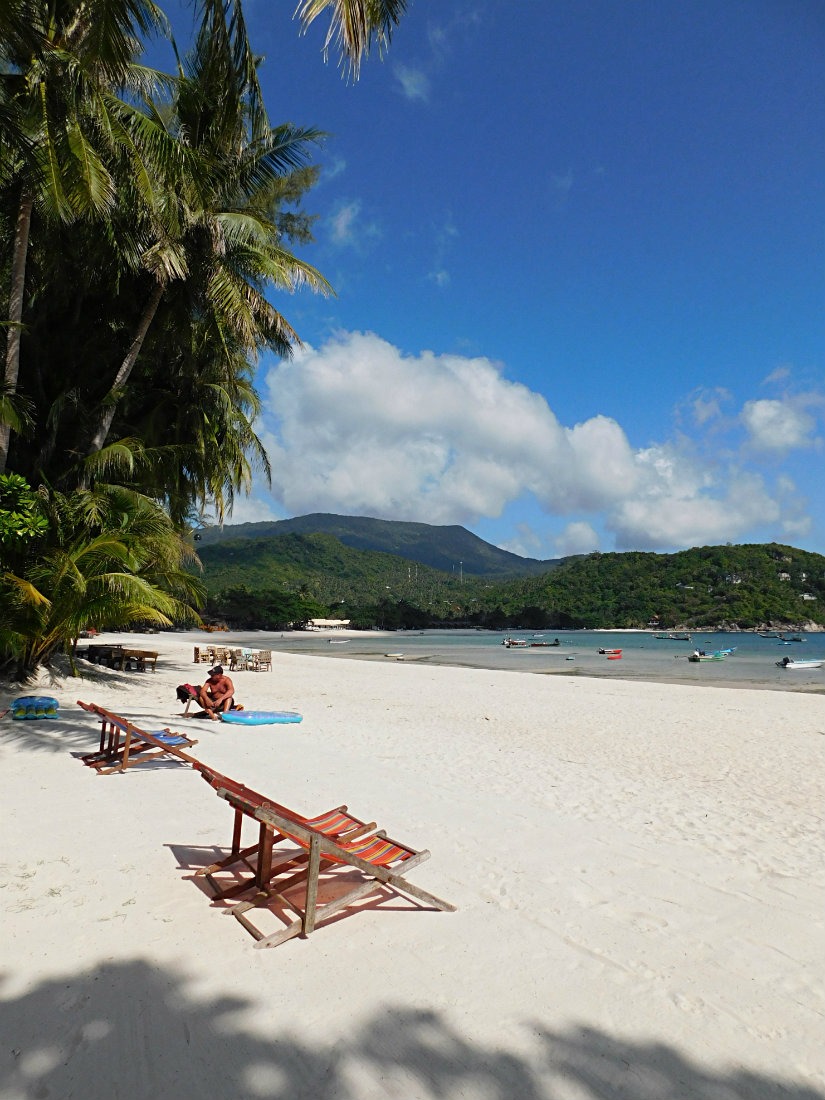 Tranquil Thong Nai Pan is located in the remote north-east of Koh Phangan, far away from the busy port of Thong Sala and the beach party mecca of Haad Rin. It is split into two villages – Thong Nai Pan Yai and Thong Nai Pan Noi.

Both villages are small beach settlements, each with a number of beachside resorts, a dusty main street, and a handful of restaurants to choose from. Thong Nai Pan Yai and Thong Nai Pan Noi are only a 25-minute walk or a 5-minute scooter trip apart, but they have quite different vibes. 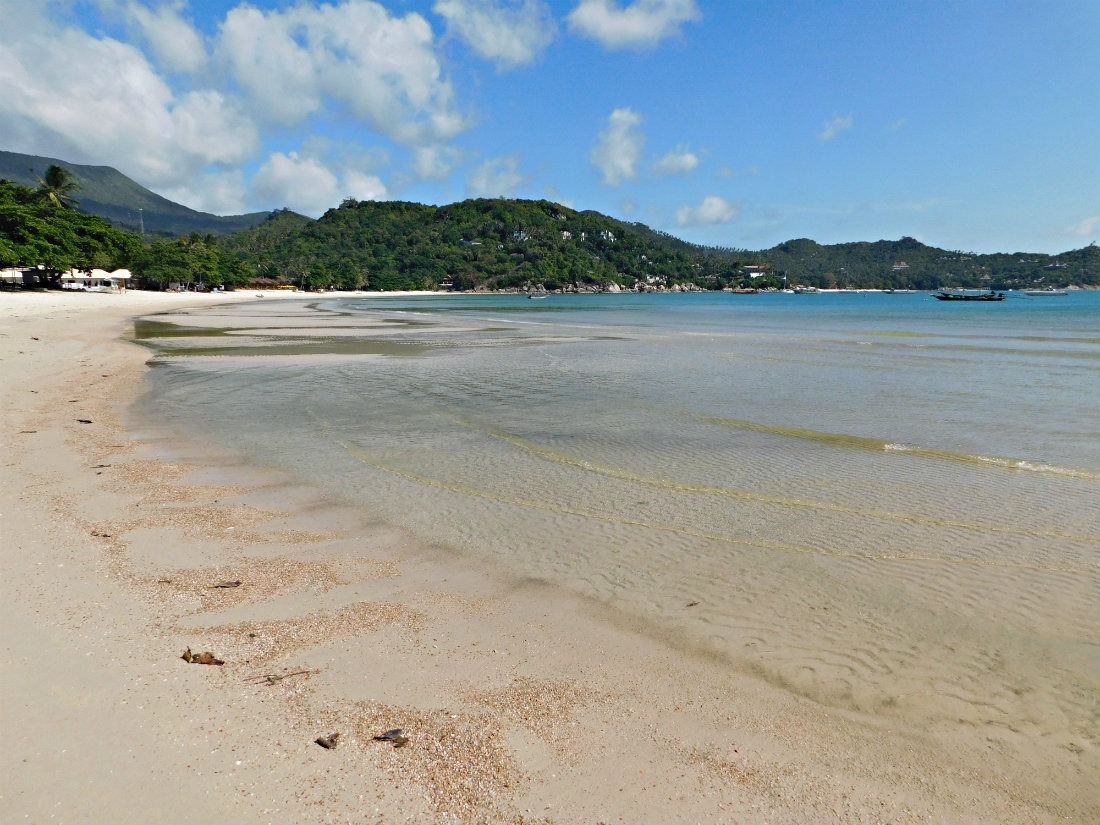 Thong Nai Pan is truly off the beaten path in Thailand, something that can be hard to find in a country that sees in excess of 30 million tourists per year.

During my time there, I really enjoyed wandering around the small and charming town centers, trying the different restaurants and bars, but the best thing about Thong Nai Pan is its beaches – wow, are they stunning!

The beaches of Thong Nai Pan are beautifully situated, with a backdrop of lush and jungled mountains. Couple that with pristine white sand, azure water, and no large development along the beachfront, and you have some pretty stellar beaches.

I believe they are the most beautiful of the Koh Phangan beaches – from what I saw anyway, particularly in June. 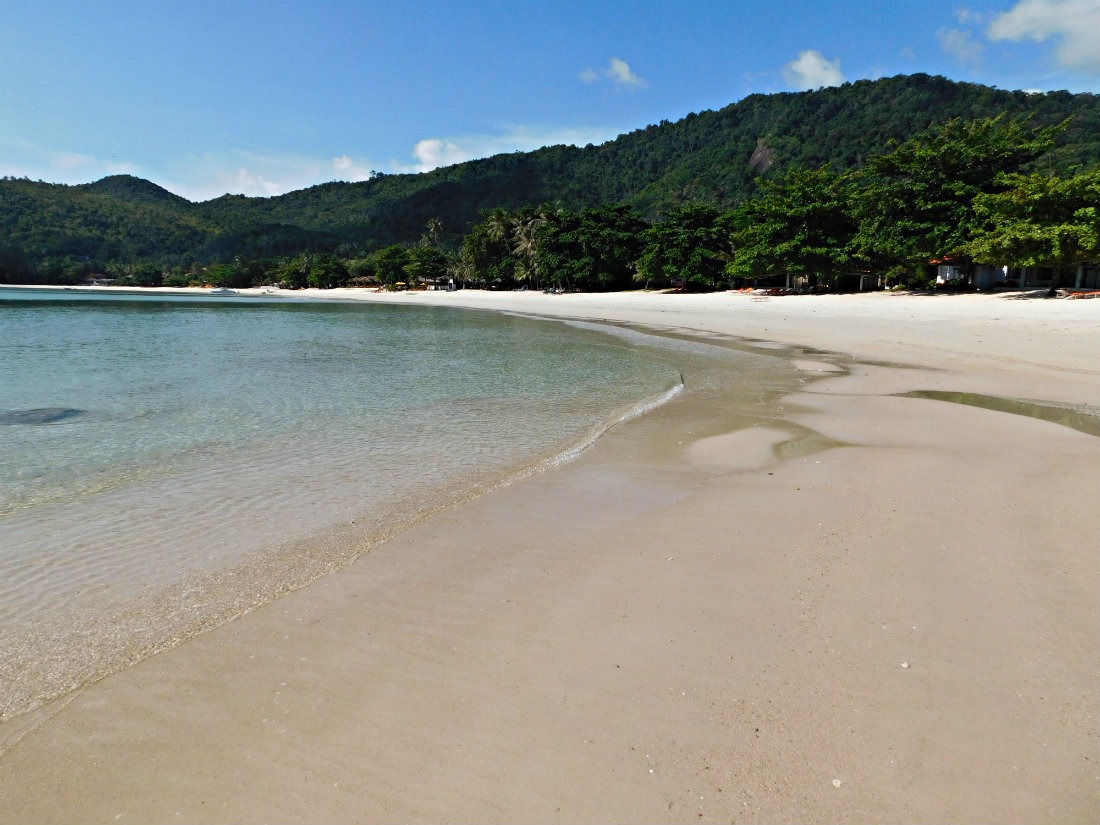 Some of the other beautiful beaches that I visited on Koh Phangan, like Haad Salad and Malibu Beach, weren’t really deep enough for swimming in the off-season when the tide is really low, but that wasn’t a problem in Thong Nai Pan.

I divided my time between both Thong Nai Pan Yai and Thong Nai Pan Noi, and although I did enjoy one of them more – I’ll tell you which in a minute – they both had their charms.

Thong Nai Pan Yai was the first place that I stayed, and my introduction to Thong Nai Pan. There weren’t a lot of great restaurants there, that weren’t closed for the season, but I loved the setting, with stunning mountain vistas backing the town, best enjoyed while walking the main street. 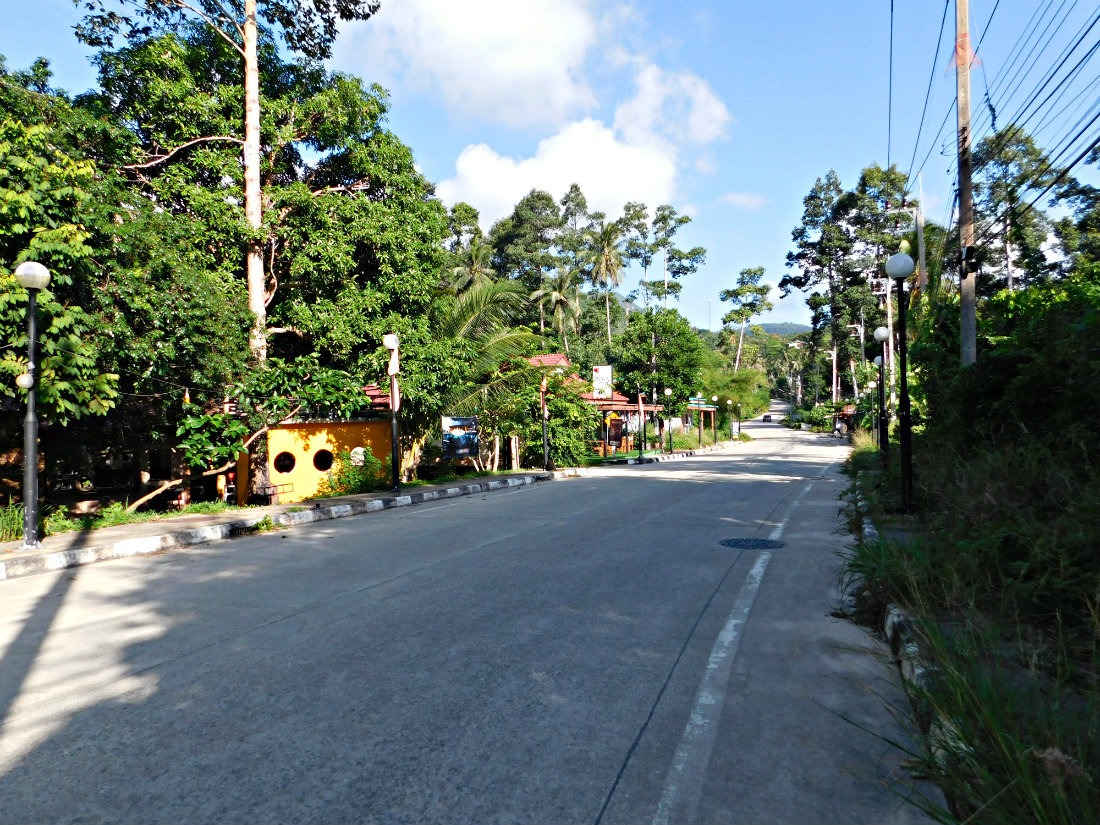 I mostly spent my time there wandering and swimming at the almost deserted Thong Nai Pan Yai beach, or sunbathing and reading on the soft, white sand.

Thong Nai Pan Yai felt abandoned most of the time, and I frequently found myself eating at restaurants that were practically empty, which wouldn’t have been much of a problem if I wasn’t traveling alone. I did start feeling lonely after a couple of days there.

Overall I enjoyed my time in Thong Nai Pan Yai, but it wasn’t my favorite. 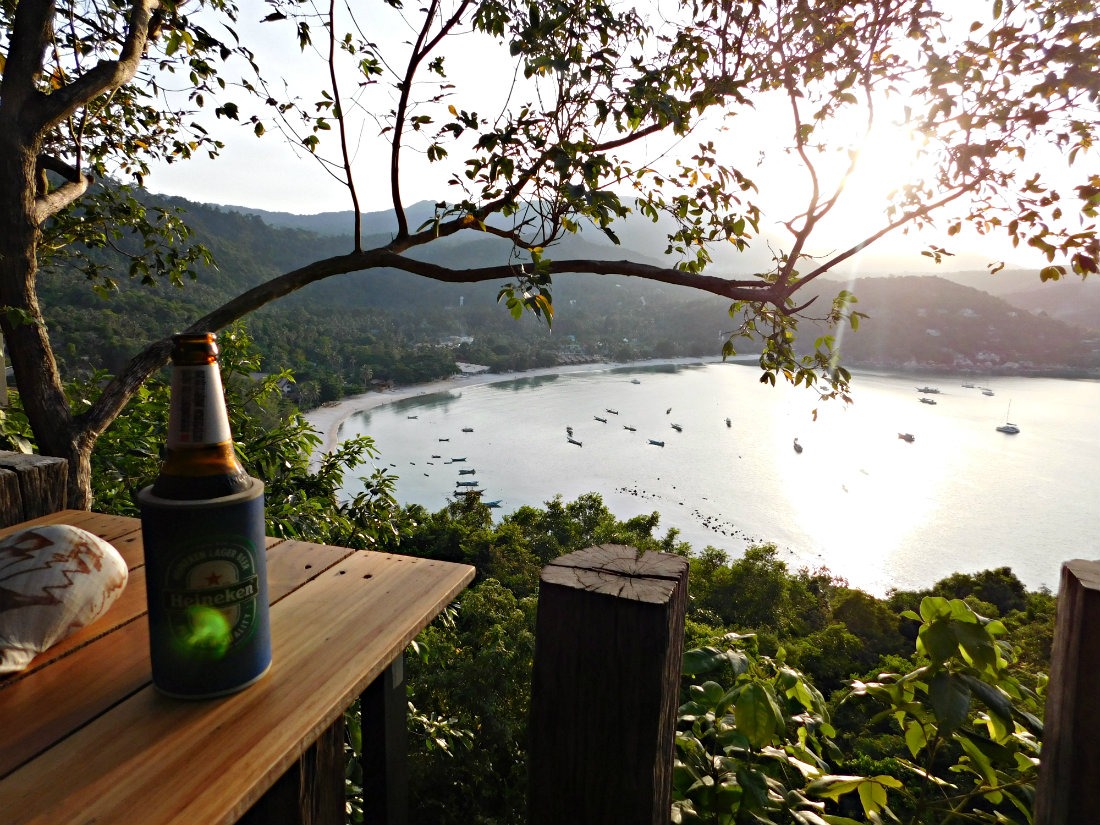 I spent the second half of my stay in Thong Nai Pan Noi, which turned out to be my favorite.

Thong Nai Pan Noi beach is slightly more beautiful in my opinion, with gently sloping sand down to the water. I spent a lot of my time there walking along the beach or floating in the clear waters.

Thong Nai Pan Noi also has the best town center – with better restaurant choices and more happening. There is more of a hippy vibe and a community feel than the spread out and sparse town center of Thong Nai Pan Yai, and it feels more lively. 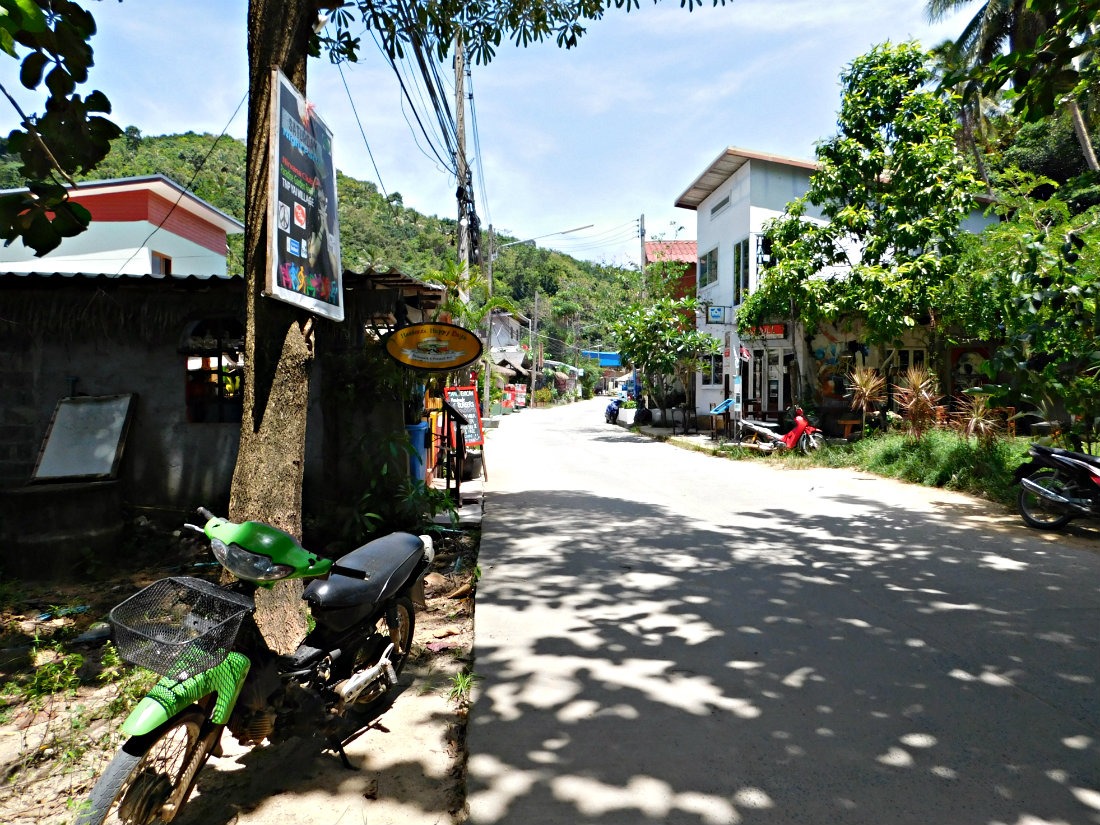 The small town center is also home to day spas, small boutiques, tour operators and coffee shops – there is even a small food truck park. Even though I didn’t meet anyone there, there were more people around and I felt less alone.

The town had a cozy feel about it and felt more welcoming, and that is the main reason why I enjoyed Thong Nai Pan Noi more.

Getting to Koh Phangan and Thong Nai Pan

It isn’t easy or cheap to get to Thong Nai Pan – or Koh Phangan in general, but there are a few options.

The fastest but most expensive way to reach Koh Phangan from Bangkok is by flying to Koh Samui and taking the ferry from there.

Alternatively, you can fly to Surat Thani on the mainland and take a bus and boat combo to Koh Phangan that you can purchase from a tour operator at the Surat Thani airport – this is what I did and the whole trip took about ten hours from leaving my hotel in Bangkok to reaching Thong Nai Pan Yai.

The longest but cheapest way to get to Koh Phangan would be to take the overnight bus or train from Bangkok to Surat Thani, then getting a shuttle and boat combo from there.

Once you get to Koh Phangan, there are usually shared taxis or pick up trucks waiting to take people to Thong Nai Pan and other places on the island. Make sure to barter with them – I got them down to 300B from 500B in 2018. Coming back in the low season can be harder, and I ended up having to pay 600B for a taxi by myself.

If you are confident with riding scooters, you could hire one in Thong Sala, the town right by the wharf, and ride over to Thong Nai Pan – the trip takes about 30 minutes and the road is windy, but it is in good condition. 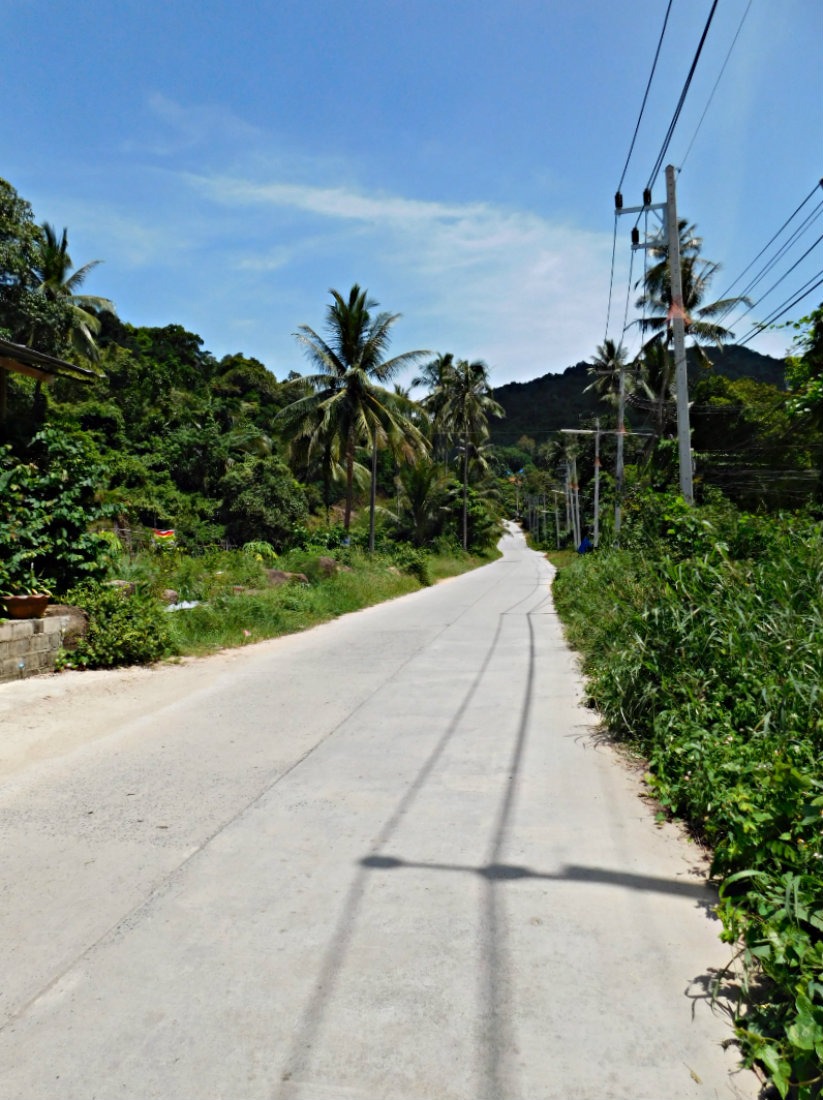 Where to Eat in Thong Nai Pan

There isn’t a massive dining scene in Thong Nai Pan but I did try a number of places during my six-night stay. These were my culinary highlights:

Second place goes to the Gorgonzola Ravioli from That’s Amore in Thong Nai Pan Noi. I’m a sucker for gorgonzola and I always tend to crave pasta most when it is hard to get (like in Asia). If you are a pasta or pizza lover – this place is legit.

I looked forward to evenings when the banana pancake man would set up on the main road at the entrance to Thong Nai Pan Noi beach – nothing like a Thai banana and coconut pancake.

The food stands on the main street by the beach entrance in Thong Nai Pan Noi are great for a cheap and delicious Pad Thai or Mango Sticky Rice, I ate here often.

If you are feeling like something different, grab a falafel pita from the Pita Restaurant by the beach – they aren’t the cheapest but they are delicious.

I enjoyed the ambiance of the beachside Baan Tapannoi Restaurant in Thong Nai Pan Noi – they make some tasty Thai stir-fries too. 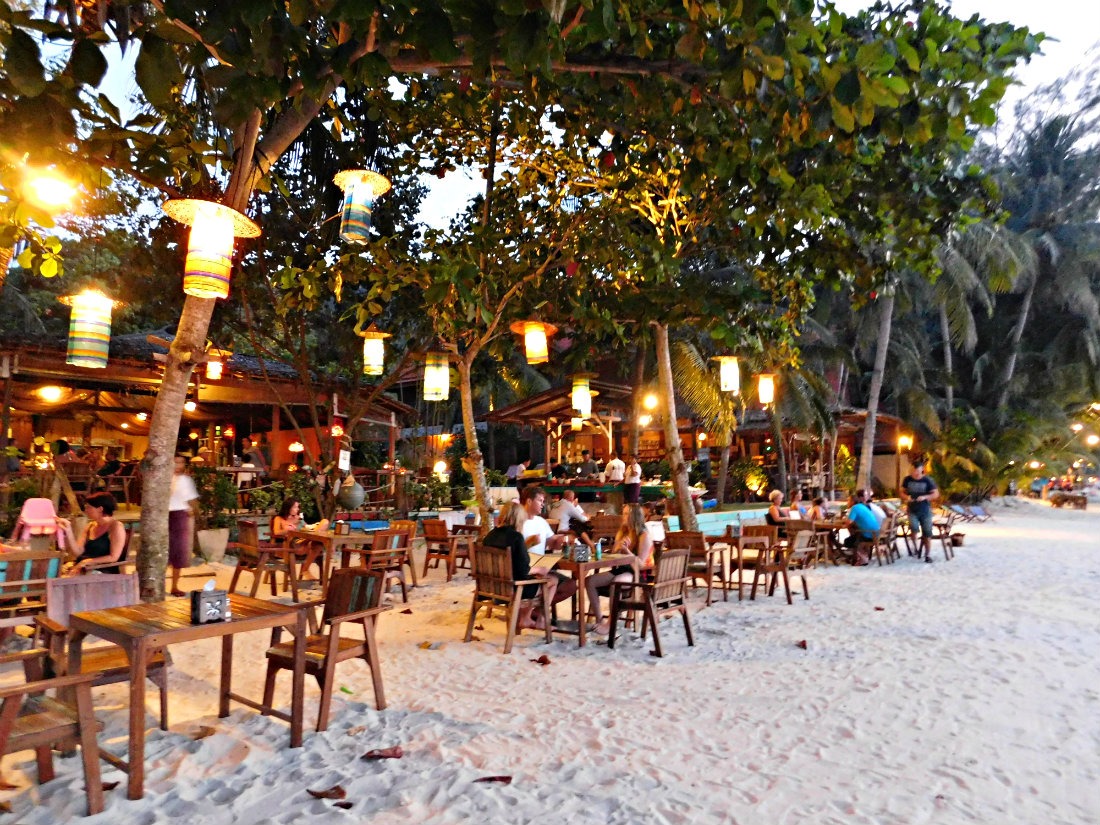 Where to Drink in Thong Nai Pan

I didn’t do a lot of drinking in Thong Nai Pan as I was by myself but there were a couple of places that stood out.

My one must-do recommendation for drinks in Thong Nai Pan would have to be 2C Sunset Bar in Thong Nai Pan Yai. It’s a steep walk up there but the view is stunning – over the beach and out to sea – and it’s a great place to watch the sunset. Just make sure you have a torch with you for the walk back down.

Tipi Cantina Bar on the road between Yai and Noi looked really cool but it wasn’t open whenever I walked past. There is a waterfall out the back of it and a small shop selling boho jewelry in the front.

Where to Stay in Thong Nai Pan

I spent three nights in a basic bungalow at Dolphin Bungalows in Thong Nai Pan Yai and it was rustic but cheap and satisfactory, and right on the beach. In June 2018 it cost me 400 Baht and had a fan, a bathroom with a hot shower, and a small deck with a hammock.

Longtail Beach Resort in Thong Nai Pan Yai would be my choice if I had a higher budget or if I was sharing the cost with someone – the pool is amazing and there is a great book exchange and hang-out area.

Dreamland Resort is also a beautiful resort with a great beachside bar and restaurant and a stunning pool.

I also stayed at Sandee Bungalow in Thong Nai Pan Noi for three nights and my bungalow was tidy and a step up from Dolphin Bungalows – although the shower was cold. It is right by the beach and the main street, and I paid 450 Baht when I stayed there in June 2018.

Santhiya Koh Phangan Resort and Spa would be my splurge choice for Thong Nai Pan Noi – it has five-star amenities and a private beach.

So, if you were wondering where to stay in Koh Phangan – look no further than Thong Nai Pan!

The Best Travel Insurance for your Trip

Make sure you get travel and health insurance before your Thailand trip, just to be on the safe side. Safety Wing is my go-to and they are cheap and easy to claim with.

Also, don’t forget to pack this awesome water bottle with a heavy-duty filter – it’ll allow you to drink from the tap, saving money as well as being more environmentally-friendly. 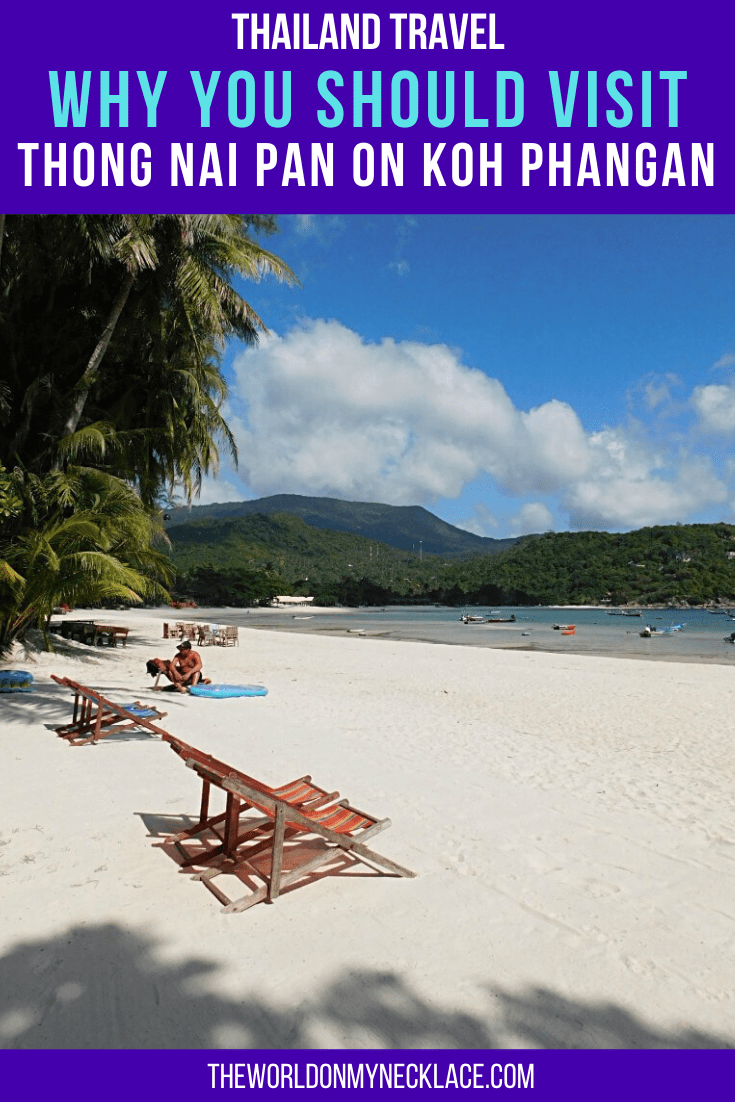 4 Comments on Thong Nai Pan: A Quieter Side to Koh Phangan, Thailand