Islands of the World, Malaysia 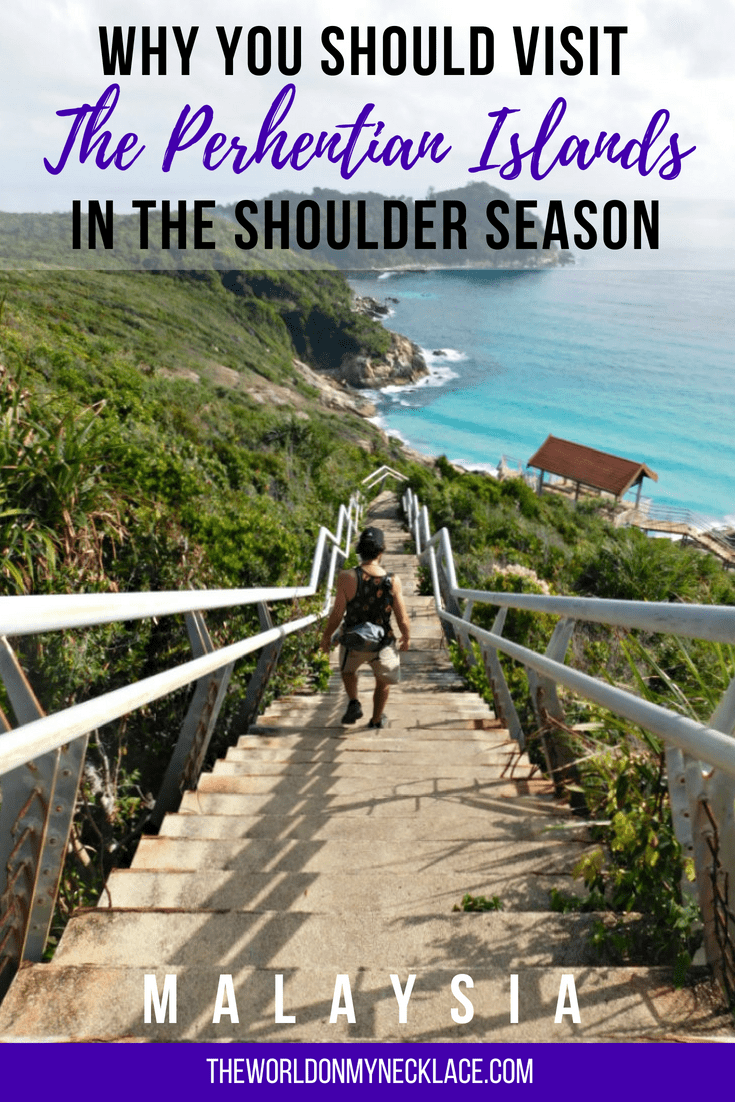 Stunning white sand beaches, a handful of bars and restaurants lining the main beaches, some of the best snorkeling in Malaysia, and the fact that there are no roads on the islands. All of these things made me want to go to the Perhentian Islands in Malaysia.

I love me an island, and the Perhentian Islands looked like my kind of paradise. 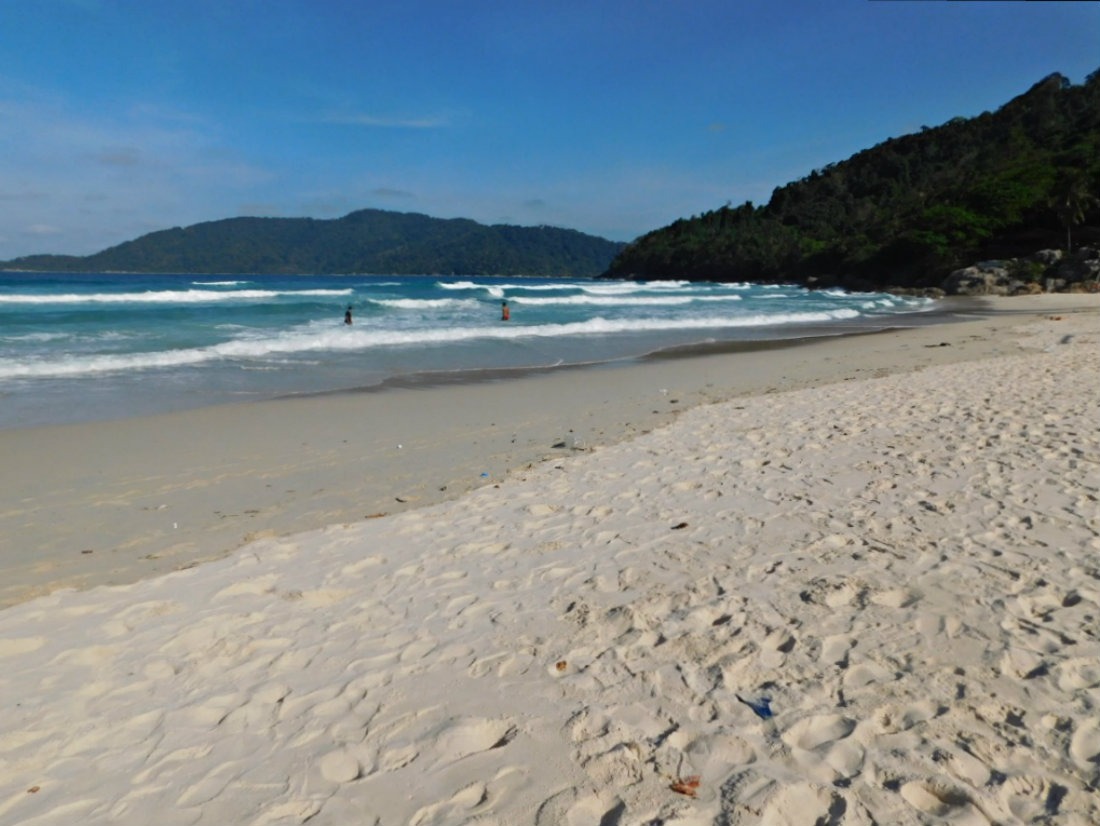 The meaning of the name Perhentian is “stopping point” in Malay – named as such because the Perhentian Islands were once used as a stopping point by traders traveling from Malaysia to Bangkok. These days it is mostly just travelers that come here, to dive or to relax. Or both.

They are known for their spectacular diving and snorkeling – in fact Pulau Perhentian Kecil is one of the cheapest places in the world to do diving certifications, and offers some of the best scuba diving in Malaysia.

I am not a keen diver but I am a big lover of island life so visiting the Perhentian Islands was a no-brainer.

The only problem was that we weren’t sure if the islands were actually going to be open when we wanted to visit – the end of February/beginning of March – as this is still technically low season in the islands, although this time of year is the best time to visit Malaysia as a whole. 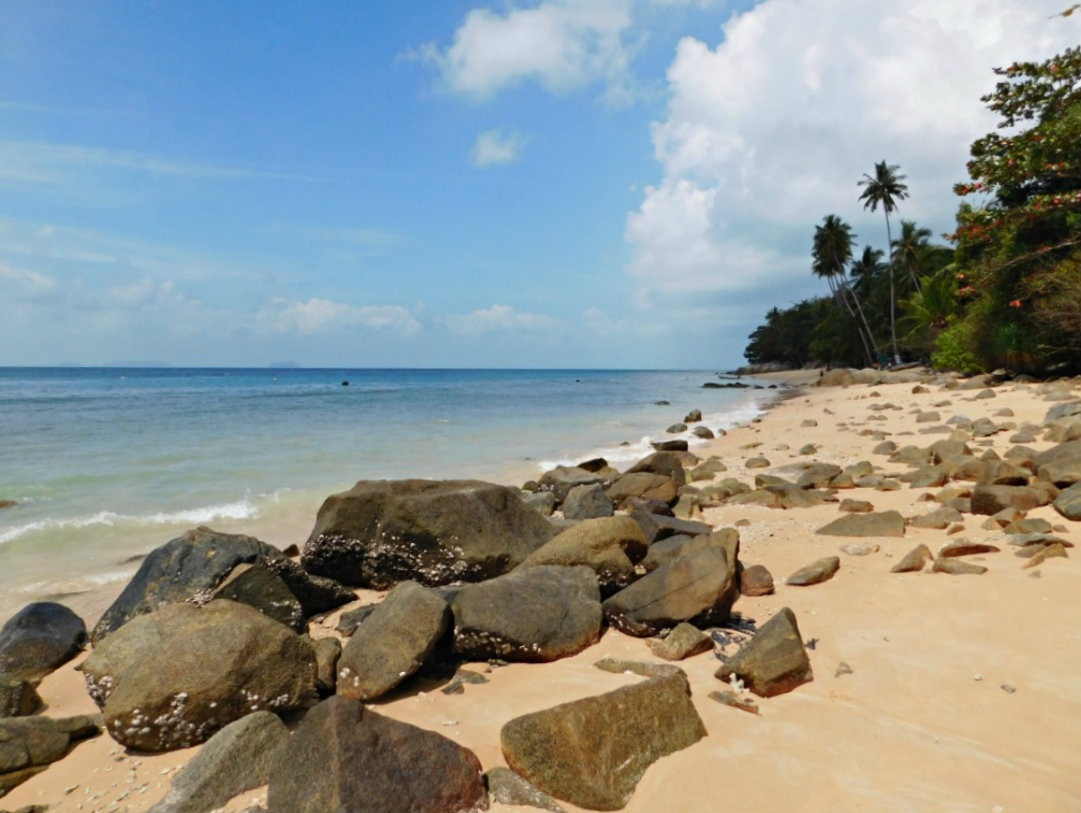 The Perhentian Islands are definitely not a year-round destination and most businesses are closed in the low season between the months of November and March, when rain and heavy swells batter the islands.

Some tour operators we spoke to said we would be fine going to the Perhentian Islands at the end of February, others said that most businesses would be closed till the end of March and that the boats to the islands wouldn’t be running. Everyone was telling us a different story and we didn’t know which story was correct.

Luckily we decided to just wing it – and I am so glad that we did! We had perfect weather nearly every day of the five days we spent there, there weren’t many people, and the vibe was relaxed.

Visiting the Perhentian Islands in the shoulder season turned out to be a blessing. 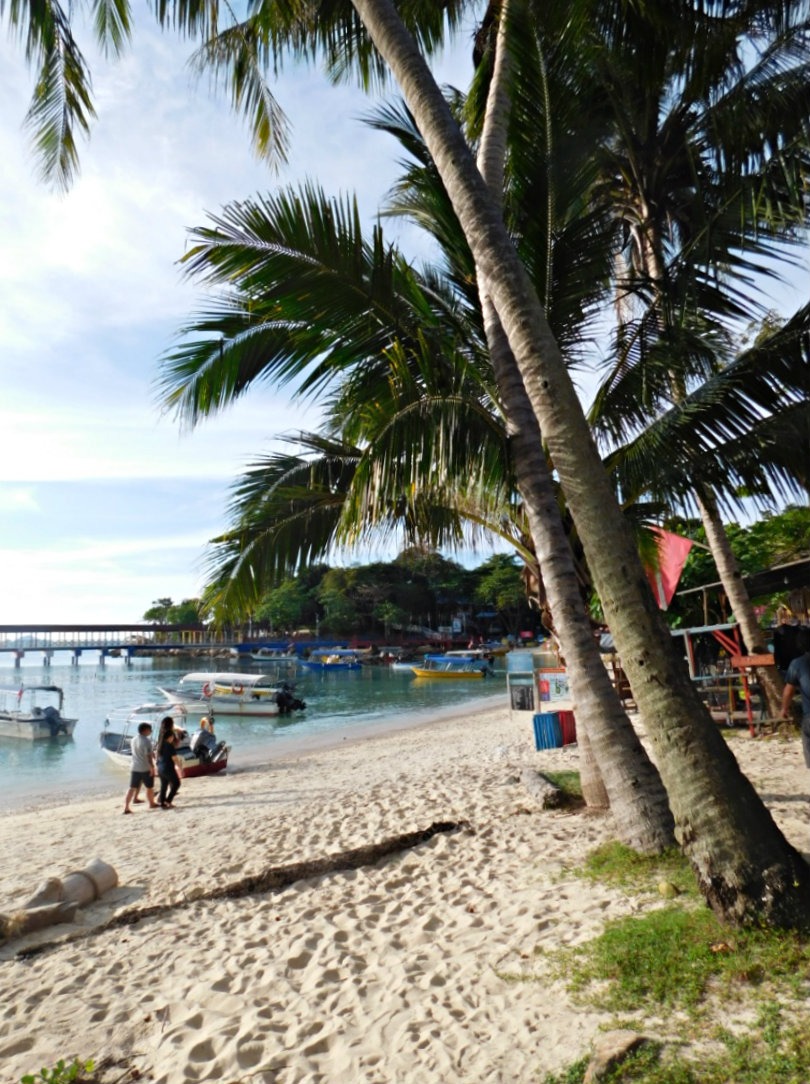 Why you Should Visit the Perhentian Islands in the Shoulder Season

You Will Have the Place Almost to Yourself

Because of the uncertainty around whether the islands were open yet or not, I think a lot of travelers were dissuaded from going – much to our benefit. Pretty much everything I had read about the Perhentian Islands told me that the islands are heaving with people during the high season, particularly from June to August, but our reality was quite different from that.

On Perhentian Kecil Island where we stayed, hardly anything in the main backpacker hub of Long Beach was open for the season yet and Coral Bay, which is on the other side of the island but is only a ten-minute walk away from Long Beach, was definitely not at full capacity. There were people, but not many.

Hiking the trails around the southern tip of the island, and to the Windmill and D’Lagoon in the north, we only saw a couple of other people on the trails – it definitely made it feel like we were on our own private wilderness adventure!

Visiting the Perhentian Islands in the shoulder season is definitely a great way to avoid the crowds. 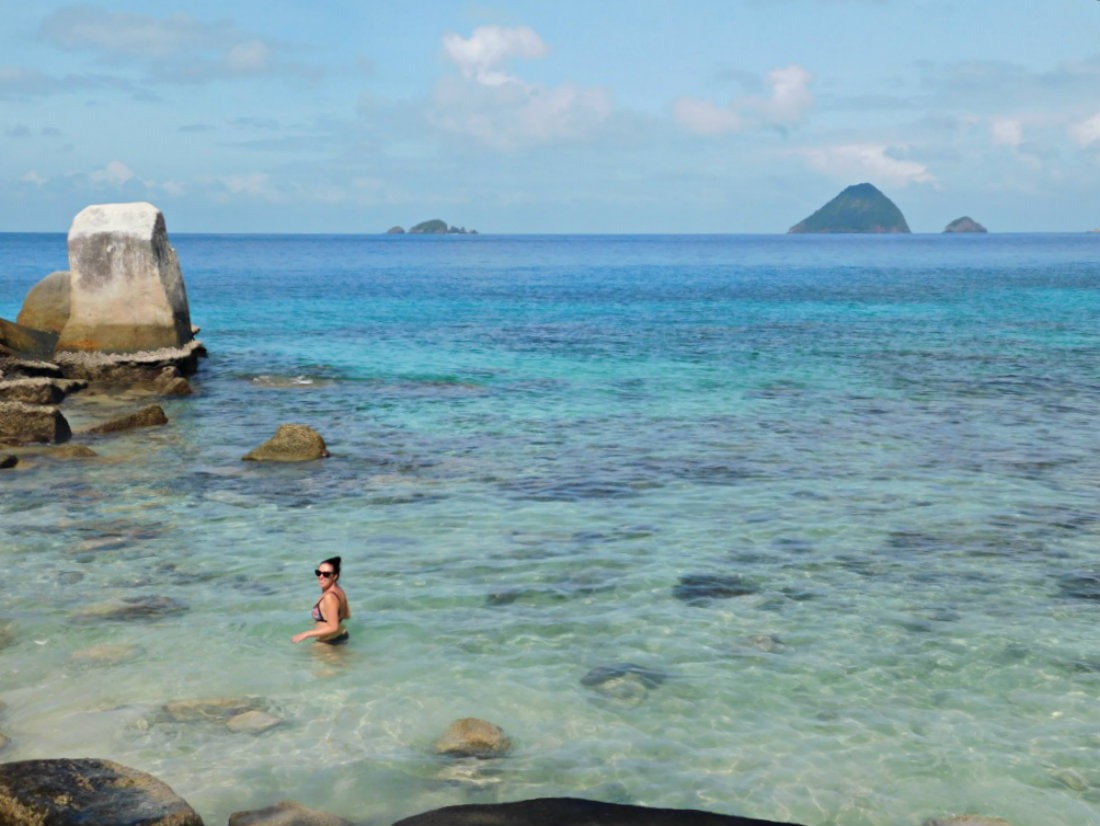 Another thing we noticed pretty quickly in regards to visiting the Perhentian Islands in the shoulder season is how much cheaper accommodation is.

We stayed at one of the nicest resorts on the island – Shari La Resort in Coral Bay – for our first four nights and were paying shoulder season rates, which was about 30% less than high season rates.

This is quite a saving when you are staying for a while as accommodation was the biggest cost of our Perhentian Island budget.

I’m not sure if there are shoulder season discounts on food and drinks, or diving and snorkeling trips, but because of the lack of people, you are in a better position to bargain with tour operators.

You Don’t Have to Book Accommodation in Advance

In the High Season, if you don’t book your accommodation in advance you will either end up paying through the nose or sleeping on the beach. This isn’t a problem in the shoulder season on the Perhentian Islands.

When we arrived in the last week of March, we had only booked our first night at Shari La Resort on Perhentian Kecil, but had no trouble extending it once we arrived.

Before deciding to extend, we asked around at a few different homestays and resorts and most of them had rooms available.

I never want to have to sleep in a park again – that didn’t end well – so it’s nice to have the freedom to be able to turn up to a place and just find somewhere that looks good to stay once you arrive. 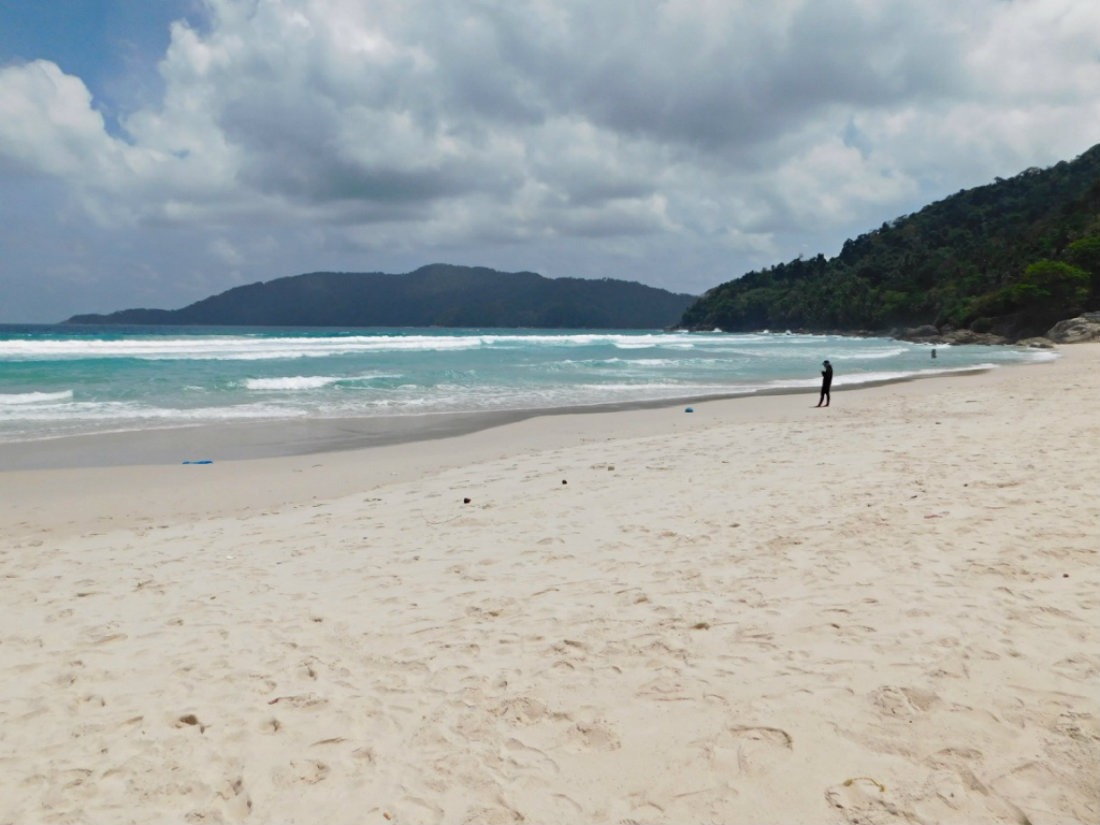 There is a More Laid Back Vibe

I find that going to places that are packed with other tourists can make me feel quite stressed out, no matter how beautiful they are. Especially if you are constantly having to book everything in advance like accommodation, restaurants, and activities so that you don’t miss out.

Because there weren’t a lot of people on Perhentian Kecil when we were there, we could just cruise around in a relaxed manner, turning up to restaurants and having no trouble getting a table, booking our snorkeling tour last minute because we wanted to see what the weather would be doing, grabbing a prime seat for the nightly movies at Ombak Divers without having to turn up well in advance. It was awesome.

Not having to worry about these things made our time on the island super relaxing and laid back, and we got that vibe from pretty much everyone else we met as well.

The Locals Aren’t Sick of Tourists yet

Another bonus of visiting the Perhentian Islands in the shoulder season is interacting with the locals when they are just opening up their businesses again after being closed for low season before they are worn down by the hordes of travelers to come.

Pretty much every interaction we had with local business owners, and locals in general, were positive ones, and there seemed to be an excitement in the air as they readied themselves for the busy season ahead. 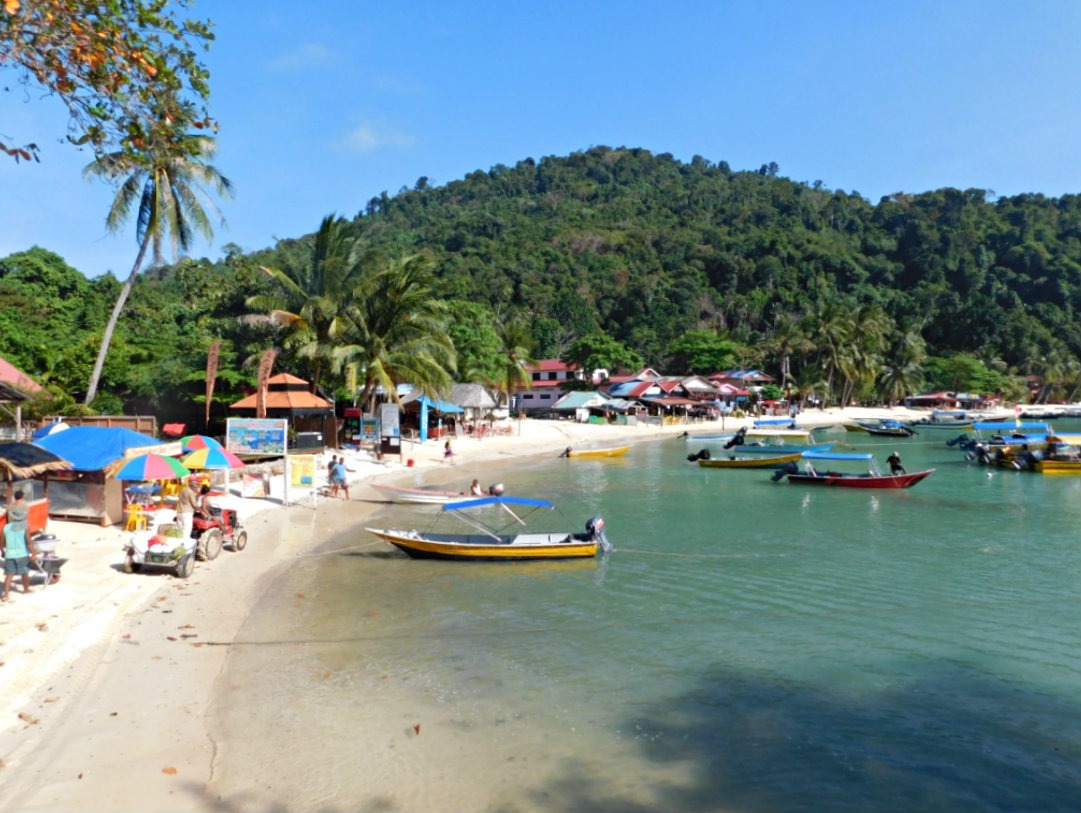 So, have I convinced you to visit the Perhentian Islands in the shoulder season?

Visiting the Perhentian Islands in the shoulder season is so worth it because you get the best of both worlds – less people, cheaper prices and, hopefully, great weather.

If you are wondering where to visit in Malaysia like we were, look no further – the Perhentian Islands are incredible! 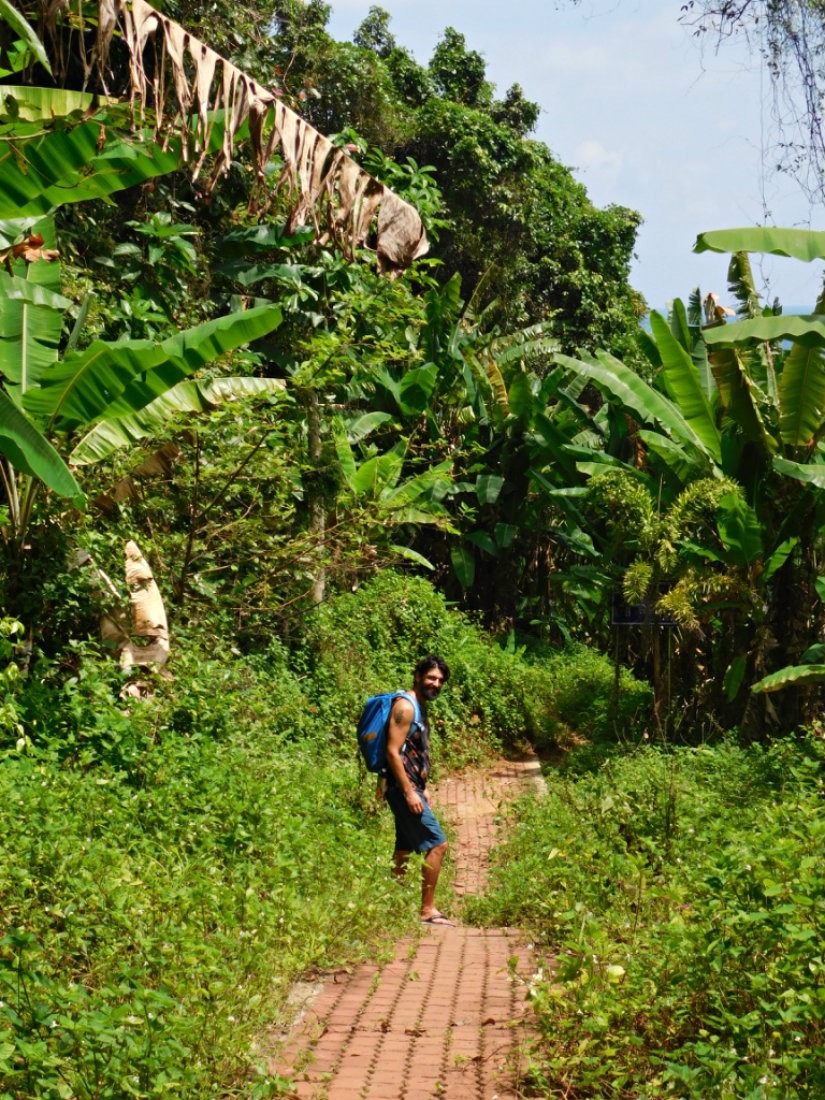 How to Get to the Perhentian Islands

If you are traveling from Kuala Lumpur to the Perhentian Islands you can either purchase a bus and boat package that will take you the whole way there, or to save money, you can book the bus to Kota Bharu, where you will then need to take the local bus to the pier in Kuala Besut to catch the boat to the islands.

There are also package and bus options from other parts of Malaysia such as Penang, Taman Negara and the Cameron Highlands. You can get great deals on buses by booking online through the Easybook website.

It is recommended that you get your speed boat ticket in advance in high season and during weekends as they can sell out.

Getting Around the Perhentian Islands

If you want to visit both Perhentian Islands, you can take a boat taxi between them with loads of operators available.

To get around the island you choose to travel to, you can also take boat taxis to different spots around either island or use the hiking trails that link different beaches and settlements.

We stayed at a couple of different places on Pulau Perhentian Kecil – both located in Coral Bay because almost everything on Long Beach was still closed.

Our splurge stay was at the luxurious Shari La Resort where we had our own private hut with aircon, a balcony, hot water shower and a massive bed, we even had buffet breakfasts included every morning. There is also a lovely private beach and an awesome deck for meals and to watch the sunset.

We also stayed at Maya Chalet, located next to Anti Gravity Divers, which is super no-frills – a basic double room with fan and cold water shower – but was a great deal for the price and has an excellent location in Coral Bay.

If we went back to Perhentian Kecil I would definitely look at staying at Ewans Place, just behind Coral Bay, as we heard really good things about their cute and colorful huts.

If you are looking to dive while you are there, a lot of the dive resorts offer free accommodation if you buy one of their Perhentian diving packages. The modern and sleek looking Ombak Divers Resort has an impressive setup and their rooms sound quite luxurious.

If you are looking for super-budget accommodation – consider staying at RainForest Camping. It is further around the island from Coral Bay with its own private beach. Although it is primitive, it is apparently comfortable and it’s very cheap. 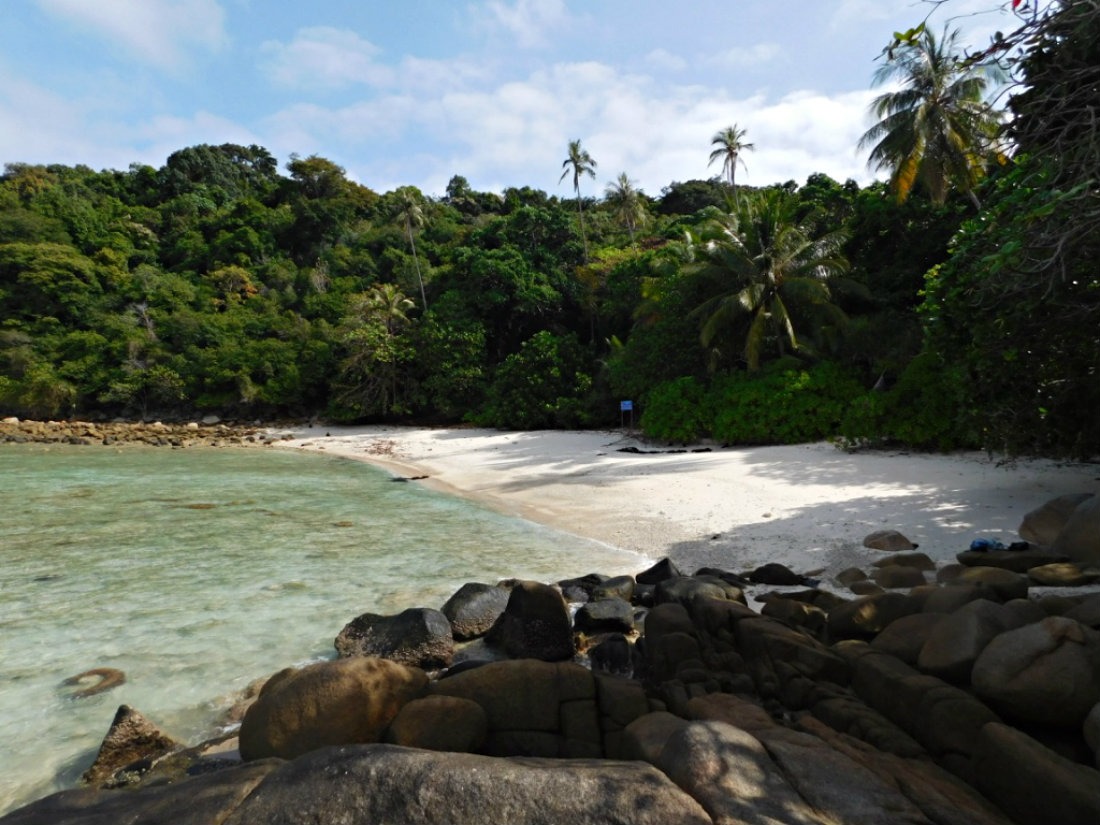 What to Do on the Perhentian Islands

Where to Eat on the Perhentian Islands

As I only visited Perhentian Kecil Island, my restaurant recommendations are only from there. 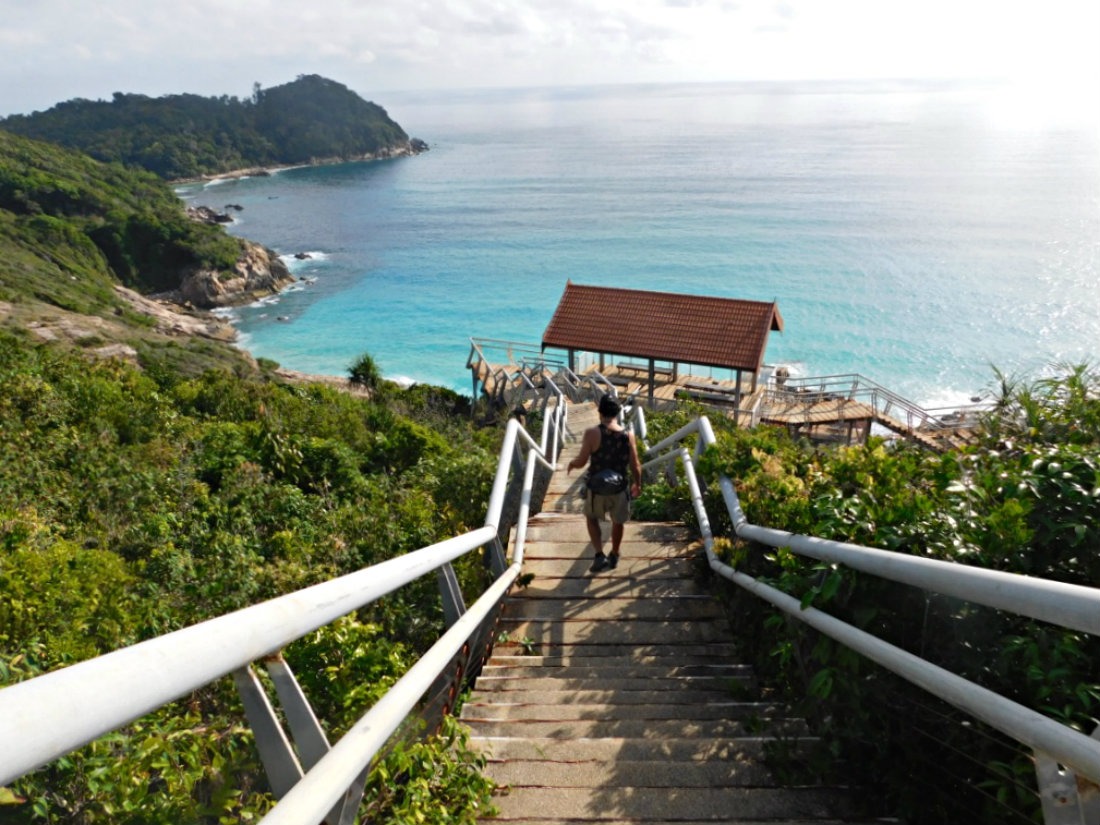 Important Tips for the Perhentian Islands

The Best Insurance for your Perhentian Islands Trip

Make sure you get travel and health insurance before your trip. Safety Wing is my go-to and they are cheap and easy to claim with.

If you liked this post, check out some more of my island posts: